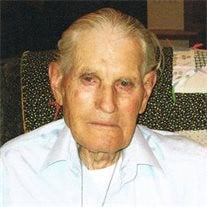 Charles "Bump" Phillip Gudgel was welcomed home into God's loving arms on Tuesday, July 2, 2013. He died at the Brown County Hospital in Ainsworth at the age of 88 after a struggle with heart problems. Bump was born to Amos and Emily (Ogden) Gudgel on July 4, 1924 at Ainsworth, Nebraska. He grew up on his family's homestead south of Wood Lake along with 4 brothers and 2 sisters. After his mother died on May 16, 1948, his father was remarried to Mable Eckhout on October 7, 1949. Three more sisters and two brothers were added to the family. Bump attended the nearby country school thru 8th grade. He married Myra Gladys Lee on November 22, 1951 at his sister, Pearl's home in Ainsworth. They began their married life on the Gudgel home place south of Wood Lake, where they lived for nearly 30 years before moving to Ainsworth. At the time of Myra's death in 2009, they had been married for 58 years. Myra was his heart and soul and life was difficult for him after she passed away. Bump enjoyed all facets of ranching. He was a champion of being a good steward of the land. In 1970, Bump and Myra sold the majority of their cattle. He became the school bus driver for the south branch of the Wood Lake school district around that same time. He continued to drive bus for the next 15 plus years. Him and his family raised alfalfa and rented out pasture land until the ranch was sold in the late eighties. Once he retired from driving the school bus and moved permanently into Ainsworth, he worked at the Ainsworth Recycling Plant for over 10 years. Bump enjoyed a good card game, no matter who his numerous victims were. He also enjoyed ice fishing, bowling, and helping Myra with whatever craft she had going on. Bump and Myra enjoyed visiting family members in many states, including Arizona, Oregon, Idaho, North Dakota, and Illinois. Later, he loved going for morning coffee at the Depot to get the latest "news". A year ago he became a resident of Cottonwood Villa, making new friends. Charles "Bump" Gudgel is survived by two sons, Charles Gudgel of The Colony, Texas, and Paul Gudgel and wife Valerie of Park River, North Dakota; two daughters, Lesa Barnum of Ainsworth and Emily Goodoien and husband Randi of Gilby, North Dakota; ten grandchildren; five great grandchildren; four sisters, Pearl Brokofsky, Grand Island, Nebraska, Ida Belle (Lavern) Fernau, Nampa, Idaho, Sharron (Dean) Jochem, Ainsworth, Sherrill (Bob) Hershiser of Baldwin City, Kansas; one brother, Jack Gudgel, Scottsbluff, Nebraska; Sister-in-law: Blanche Gudgel of Ainsworth; and many nieces and nephews. Bump was preceded in death by his wife, Myra, both parents, and 4 brothers, Francis, Sherman, Bill, and Andrew. Funeral services were held on July 6, 2013 at the Congregational United Church of Christ in Ainsworth. Pastor Neva Murphy officiated over the service. Dori Palmer was the organist. Congregational Selections of "What A Friend We Have in Jesus" and "Blest Be The Tie That Binds" were provided along with a special guitar selection of "In The Garden" by Chris Gudgel. Pallbearers were, Tyler Gudgel, Randi Goodien, Zach Gudgel, Brady Gudgel, Daniel Gudgel and Derek Goodoien. Honorary Bearers were all of Bump's school bus kids. Hoch Funeral Home of Ainsworth was in charge of the arrangements. Memorials were suggested to the family in his name.

Charles "Bump" Phillip Gudgel was welcomed home into God's loving arms on Tuesday, July 2, 2013. He died at the Brown County Hospital in Ainsworth at the age of 88 after a struggle with heart problems. Bump was born to Amos and Emily (Ogden)... View Obituary & Service Information

The family of Mr. Charles P. "Bump" Gudgel created this Life Tributes page to make it easy to share your memories.