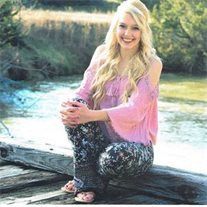 Chaeley Jo Ruegge was born June 25, 2000 at O'Neill, Nebraska, to David and Jennifer (Adsit) Ruegge. Her life was tragically taken in an automobile accident on January 11, 2018, at Ainsworth, Nebraska. She attended kindergarten at O'Neill Public School and was currently a senior at Ainsworth High School. Chaeley Jo was a beautiful young lady with a smile that would light up a room, and a bright personality that was larger than life. She found a friend in everyone she met, and deeply touched so many lives. She loved people, music, animals, Christmas, and life in general. Chaeley could often be found reading a book, snuggling with pets, giggling about online videos, singing and dancing to her own music, or just being happy and silly. She was looking forward to the upcoming track season and graduation, and planned to attend UNMC to become a nurse. She will be immensely missed by everyone who knew her. Chaeley was preceded in death by her grandfather, Terry Ruegge, and great-grandparents Art and Alta Retzlaff, Clint and Hattie Ruegge, Harold and Gertrude Adsit, and Art and Evelyn Dennie. She is survived by her parents, Dave and Jenne Ruegge of Johnstown, Nebraska; brother, Clint Ruegge of Brownlee, Nebraska; sister, Nicole Fischer and special friend Tyler Johnson of Ainsworth; nephew, Leighton Fischer; and grandparents, Gloria Ruegge of O'Neill, and Phil and Kris Adsit of East Troy, Wisconsin, as well as many aunts, uncles, cousins, and countless friends. Funeral Services were held at the Lila McAndrew Gymnasium at Ainsworth with Reverend Georg Williams and Reverend John Ryding officiating at the service. Music was provided by Sherry Campbell. The song selection of "Hallelujah" was sung by Chaeley's Senior Friends. Lisa Wiebesiek sang "The Lord's Prayer." "Crossing to The Other Side" was sung by Mike Baxter. Pallbearers were Mike Ferguson, Jimmy Ferguson, Brad Gambill, Jeff Gambill, Micah Graff, and Mark Sedlacek. Honorary Bearers were the Senior Class of 2018. Graveside Services followed in the O'Neill Cemetery. Hoch Funeral Home of Ainsworth was in charge of the arrangements. In lieu of flowers memorials were suggested to the family for a future designation.

Chaeley Jo Ruegge was born June 25, 2000 at O'Neill, Nebraska, to David and Jennifer (Adsit) Ruegge. Her life was tragically taken in an automobile accident on January 11, 2018, at Ainsworth, Nebraska. She attended kindergarten at O'Neill Public... View Obituary & Service Information

The family of Miss Chaeley Jo Ruegge created this Life Tributes page to make it easy to share your memories.