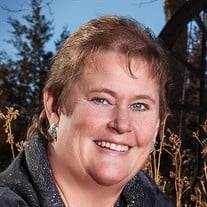 Candance Jo Willey was born January 23, 1968, in Rapid City, SD to Allen and Virginia Willey. She passed away December 21, 2020 at Faith Regional Hospital in Norfolk, NE. Candi lived her life in South Dakota, Wyoming and Nebraska, attending junior high and high school in Buffalo, WY, graduating in 1986, then college at the University of Wyoming in Laramie. She married Lenny Fernau on May 5th, 2002 and the couple have made their home in Ainsworth, NE working in surrounding areas. Candi pursued her career in the medical field as a Registered Nurse and achieved her Bachelor of Science in Nursing Degree from Northeast Community College, and enjoyed teaching CNA classes locally offered through Northeast. She was an amazing nurse, kind and generous to the many, many patients she served in Ainsworth, Bassett, and Kearney hospitals, as well as the Sandhills Care Center. She really loved her work, always picking up holiday shifts and filling in for coworkers when needed. Candi loved kids and being “Nurse Candi” in the Ainsworth Community Schools was a highlight in her nursing career. Candi’s children were her furry babies; she loved her dogs and everyone else’s. She was a member of Live Love Wag of Ainsworth and made it her mission to find homes for many dogs and many went “home with Candi”! Candi also enjoyed playing on the co-ed softball team in the summers. Candi is preceded in death by her only sister Shellie Egly, mother Virginia Wiley, stepfather Bruce Wiley, father-in-law Leonard Fernau and cousin Darin Willey. Left to mourn her passing are husband Lenny Fernau of Ainsworth; her four legged children: Bella, Duck, Patches, Minnie and Yeti; mother-in-law Cheri Fernau of Ainsworth; stepmother Joyce Wiley of Moorcroft, WY; nephew Grady Egly of Rapid City, SD; brother-in-law Roger (Sue) Egly of Oelrichs, SD; sisters-in-law Candy Fernaux of Nashville, TN, Julie (Jon) Cyriacks, of Kearney, NE, Lori (Chad) Rolfes of Vermillion, SD, Janelle (Mark) Johnson of Kilgore, NE; father Allen (Lana) Willey of Norwalk, IA; siblings Kevin (Lori) Willey of Sheridan, WY, Randy (Kenna) Willey of Norwalk, IA; stepbrothers Wayne (Janet) Miller of Sioux Falls, SD and David (Karyl) Miller of Stanley, ND; along with other family members. It would be fair to say Candi put others care before her own. Behind the scenes, she had been fighting her own battle with cancer since 2019. Her compromised immune system left her susceptible to the effects of Covid. Candi continued her work as an RN doing exactly what she loved until her very last days. She will be dearly missed by her family and community. Memorial Services were held on Wednesday, December 30, 2020 at the United Methodist Church in Ainsworth. Pastor David Randall officiated at the service. The CD music selection played was “Angels Among Us”, by Alabama. Special music “Carrying Your Love With Me” by George Strait was played by Nichole Flynn and sung by Kayla Nilson and Erin Rathe. Honorary Urn Bearers: Members of the medical community to which she served. A Private Family Inurnment will be held at a later date in the East Woodlawn Cemetery in Johnstown, Nebraska. Memorials were suggested to the Brown County Hospital, the Live-Love-Wag Pet Program of Ainsworth, or to the Ainsworth Community Schools for a nursing scholarship in Candi’s name. Arrangements were under the direction of the Hoch Funeral Home of Ainsworth.

The family of Candance J. "Candi" (Willey) Fernau created this Life Tributes page to make it easy to share your memories.