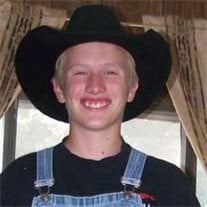 Cameron Milt Lewis, 18 of Newport, Nebraska, went to be with his Savior in Heaven on July 6, 2013, at his home on the ranch northwest of Newport. A son, Cameron Milt Lewis was born to Milton and Betty (Sieker) Lewis at Valentine, Nebraska on October 1, 1994. He joined two sisters, Victoria Faith and Serenity Joy. They resided on the same ranch where his Granddad was raised. When Cameron was one and a half years old his parents moved to another ranch thirteen miles north- west of Newport. When Cameron was two years and three months old, our Mom, Betty went to be with her Savior in Heaven. Dad "pulled together" and with his three children and with the LORDS help and grace we made it. God knew what was needed. This home was a boys' dream, where a creek flows through, with lots of wildlife and beauty. Cameron as a child loved going for walks and playing in the creek with his sisters and their Great Pyrenees dogs to protect them. Later on in life, "when he thought he was old enough to go by himself," he would come in and grab his .22 rifle, head out the door as fast as he could, like his father and grandfather. They just lived to go hunting or to catch a coyote. Their stories were never old to them or far from their minds. Dad would drop everything if Cameron said "there was a grouse over east or west" the dust would be flying to the top of the hill as they raced off to go hunting. Cameron was a fearless person and he lived everyday to the fullest always laughing and "pulling someone's leg about something." He loved riding his dirt bike. Found it very challenging, spinning the corners and jumping, (he was always trying to outdo his Dad) from the stories told to him. Cameron was a very good cook, at an early age he even made his own homemade butter. He could make the best homemade cinnamon rolls and he loved to grill using his own homemade barbeque sauce. Every morning Cameron woke on the farm with a big smile on his face and ready to go to work. He loved to get everyone out of bed and always joked with us about how "we did not need any coffee." He took excellent care of the farm animals and had a special interest in the dogs training them to do many things. Cameron was a very good mechanic and loved working on his little pickups and always ready to help Dad fix or weld something. He was very sharp on the computer and could look up mechanic information and ordering parts. Cameron had a strong faith in God, always there for his family and was very faithful in helping in anything that needed to be done. Cameron loved his family with all his heart and was loved immensely by each one of them. Cameron loved branding, family "get-togethers", playing with his cousins and visiting his aunts and uncles. Cameron also, loved lifting weights and wanted to be stronger than the next guy. He was always telling everyone about how much he could lift and was very proud of it. Cameron grew into a very fine young man. He was very proud of his sister's and was thrilled to be an uncle to Hannah. Every time he would see Hannah he would come over and say, "How are you doing Hannah," and take her right out of your arms. You will always live deeply in our hearts Cameron. WE LOVE YOU! Cameron was preceded in death by his mother, grandfathers, grandmother, and aunts, He is survived by his father Milton Lewis of Newport; 2 Sisters, Victoria Bowling and husband Jim, and their daughter Hannah of Colome, South Dakota and Serenity Lewis of Newport, and special friend Eric Spilinek of Elba, Nebraska, as well has many uncles, aunts, cousins, and a host of family and friends. A Graveside service was held on Thursday, July 11, 2013 at the Willowdale Cemetery near Newport. Pastor Keith Moody officiated the service. CD selections of "Go Rest High On That Mountain, "There You'll Be" and "On Eagles Wings" were provided. Casketbearers were Dusty Lewis, Gaylen Lewis, Shad Lewis, Jack Martin, Randy Petr and Ray Porter. Honorary bearers were all of Cameron's other family and friends. Hoch Funeral Home was in charge of the arrangements. Memorials were suggested to the family in his name.

Cameron Milt Lewis, 18 of Newport, Nebraska, went to be with his Savior in Heaven on July 6, 2013, at his home on the ranch northwest of Newport. A son, Cameron Milt Lewis was born to Milton and Betty (Sieker) Lewis at Valentine, Nebraska... View Obituary & Service Information

The family of Cameron Milt Lewis created this Life Tributes page to make it easy to share your memories.

Cameron Milt Lewis, 18 of Newport, Nebraska, went to be with...