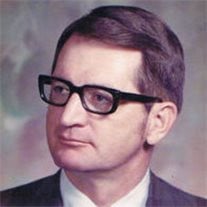 Bruce Calvin Wiebe was born on August 15, 1934 to Earl and Laura (Thiessen) Wiebe at the Mennonite Hospital in Beatrice, Nebraska. He was joined 7 years later by his brother Gary. His childhood was spent in Beatrice. In 1952 he graduated from Adams High. Following graduation he enlisted in the Air Force. His 4 year military career started with basic training at Mather's Air Force Base in Sacramento California. He was then stationed in Okinawa in the Air Police and worked with the Sentry dogs. On November 19, 1957, with a honorable discharge, he was awarded the National Defense Service Medal and Good Conduct Medal. Bruce continued his proud heritage of being an American, with the Legion Post #123 in Bassett, Nebraska. Bruce returned to Beatrice where he became the Deputy Sheriff of Gage County. On May 7, 1958 he married Deanne Gerberding. They moved to Hastings, Nebraska where he started his career as a Game Warden. In 1960, son Eric Bruce was born and in 1963, daughter Amy Elizabeth "Sam", completed the Wiebe family. 1969 brings Bruce and family to the Sandhills, as the District 2 Supervisor in Bassett. It didn't take long for the sand to get in his blood, he enjoyed announcing local rodeos, fair parades, and working in the pens of the sale barn. After 42 years of outstanding service to the Law Enforcement Division of the Nebraska Game and Parks Commission he retired. Bruce took up the hobby of making jerky and leather backs. He could be found milling around town giving free samples of his jerky away! Bruce also enjoyed the many friends that stopped by for "beer thirty", drinking "hookers." He took great pride in his "handyman" job at Meadow View. Bruce enjoyed the adventures of his three grandchildren, and their friends, that called him "Pappy." Bruce passed away on May 1, 2013 at the Rock County Hospital Long Term Care. He was preceded in death by his parents, step-father Gus, and much loved son, Eric. Survivors include his wife of 55 years, Deanne, and daughter, Amy Jackson both of Bassett; daughter-in-law, Judy Wiebe of Ponca, Nebraska; grandchildren, Megan, Kacie and Kyle Bruce; brother, Gary Wiebe of Beatrice;sister in laws Yvonne DeRiese of Hastings Ne, Maggie Spilker and husband David of Beatrice and 9 nieces. He leaves behind many happy memories with family members and friends. Memorial services with Military Honors were held on May 6, 2013 at the St. Peter Lutheran Church in Bassett, Nebraska with Pastor John Brink officiating over the service. Music was provided by Tracey Nelson and Nancy Carley. Special remarks were read by granddaughter, Megan. Military honors were presented by members of the Nebraska Game & Parks Commission with the American Legion Post #123 also in attendance. Last call was given from the Game & Parks Commission. Hoch Funeral Home of Bassett was in charge of the arrangements. In lieu of flowers, donations may be given to the Nebraska Game & Parks Commission, the American Legion Post #123, the St. Peter Lutheran Church, or to the donor's choice.

Bruce Calvin Wiebe was born on August 15, 1934 to Earl and Laura (Thiessen) Wiebe at the Mennonite Hospital in Beatrice, Nebraska. He was joined 7 years later by his brother Gary. His childhood was spent in Beatrice. In 1952 he graduated from... View Obituary & Service Information

The family of Mr. Bruce C. Wiebe created this Life Tributes page to make it easy to share your memories.