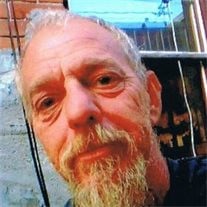 Brian Dean Gaskins was born on March 18, 1962 in Ainsworth, Nebraska. His parents were Orville and Opal (Allen) Gaskins. Brian passed away on Wednesday, June 21, 2017 at his home west of Ainsworth at the age of 55 years. Brian spent most of his life in Brown County, living south of Ainsworth as a small child and later just west of town. Brian "grew up outside" having all kinds of pets; dogs, cats, exotic poultry, rabbits and his ornery Shetland pony. He and his sister, Mona roamed the pastures around their home, building hideouts and climbing trees. They only came home when their mom honked the car horn or it was too dark to play. Brian attended Lila McAndrew Grade School and graduated from Ainsworth High School in 1981. After high school Brian worked at a dairy in southern Rock County and at a larger dairy near Longmont, Colorado. He married Lisa Bartlett of Bassett in 1985 and their two children, Dustin and Tara, completed the family. They moved back to Ainsworth in 1989 to be closer to family and Brian began working at Sears Feedlot. Lisa and Brian were later divorced. Brian worked for a time at Daniels Manufacturing and most recently at Rolling Stone Feedlot. Brian was a young boy when he discovered the sport of fishing and it became one of his favorite pastimes for the rest of his life. A good day for Brian was heading off to his favorite fishing spot, sometimes with Dustin, Tara or the grandkids. Brian's second favorite thing was riding his Harley. He was a member of the Iron Horse Riders and attended motorcycle rallies in South Dakota and Florida. He had a quirky sense of humor and with his goofy little laugh it was easy to smile when you were around him. He was a good friend to many. Brian was preceded in death by his parents, Orville and Opal Gaskins. He is survived by his children, Dustin Gaskins and Tara Gaskins of Ainsworth; three grandchildren, Daina, Kaylee and Izzabella; brother, Dennis Gaskins and wife Sally of Overton, Nebraska; sisters Pat Gaskins of Plainview, Nebraska and Mona Davis and husband Robert of Bassett Nebraska, nieces, nephews, and cousins. Memorial Services were held on June 29, 2017 at Hoch Funeral Home in Ainsworth. Dan Woods served as the officiant. A video presentation in tribute to Brian was shown along with sharing of memories from friends. Inurnment is to be held at a later date.

Brian Dean Gaskins was born on March 18, 1962 in Ainsworth, Nebraska. His parents were Orville and Opal (Allen) Gaskins. Brian passed away on Wednesday, June 21, 2017 at his home west of Ainsworth at the age of 55 years. Brian spent most of... View Obituary & Service Information

The family of Mr. Brian D. "Fuzzy" Gaskins created this Life Tributes page to make it easy to share your memories.