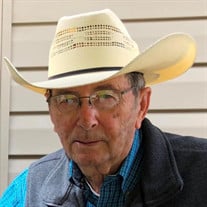 In the winter of 1936 during a raging snow storm Brent Edwin Johnson was born to Earl and Edith (Greene) Johnson on January 28, 1936 in the Marshall house south of the tracks at Johnstown, NE on Main Street. Shortly after (7 min) twin brother Bruce joined him. They lived at the Tinkham place north of Johnstown until they were 3 years old. The family then moved to a farm west of the Ainsworth Regional Airport. He attended grade school at North 84 and South 84, then high school at Ainsworth, NE. He graduated from Ainsworth High School in 1954. Brent and Bruce set the state record in Class B track running the 880 yard relay for the years of 1953 and 1954. After graduation in 1954, he farmed with his dad and Bruce for 2 years. Brent and Bruce then joined the service and spent 16 months in Germany. They served in the same company but different platoons. After returning from service they farmed for 2 years with their dad until he retired. This led them to farm and feed cattle with neighbor Henry Miles, up to the time they broke out on their own in the early 70's. They continued to farm for the next 45 years together and expanded their operation to include raising corn, alfalfa, feeding cattle, selling seed corn, and even commercial trucking of grain and livestock. 2003 found the twins dividing their partnership. Brent continued to farm, and kept the trucking business with son Mark. Brent loved every aspect of farming, working in the feedlot or trucking. He never complained about what needed to be done, he just did it. On August 21, 1960 he married the love of his life Karen Kay Greder in the Zion Lutheran Church in Ainsworth. To this union 3 children were born Mark Edwin, Kathryn Kay and Beth Ann. Brent served on many boards including the Johnstown United Methodist Church of which he was a member for over 60 years, the Farmers Ranchers Coop Board of Directors, a member of the Gideon's International Organization, Brown County Service Selective Board, Brown County Veterans Board, Brown County Veteran's Memorial Wall, Brown County Weed Board, Brown County Ag Society, Brown County Foundation as a lifetime member, and the Ainsworth Irrigation District Board for 40 years. In 1962 the irrigation project came to the area and he was very proud to be instrumental in this project. He was a member of the Ainsworth American Legion Post #79 and served on the Honor Guard Firing Squad and played Taps on the bugle. The E & L Baseball program was a big part of his life, from coaching to umpire and everything in between. The joy of his life was his family and he was proud of each and every one of them. He especially loved seeing all the "little" people come and go, stopping by for a cookie from the freezer and watching all of the activities they were involved in. He was always telling them stories, some may have been fact or more might have been fiction! It always began with "let me tell you a story." Brent is preceded in death by his parents Earl and Edith Johnson; 2 brothers, Wayne and Err Johnson; 3 sisters, Susan Haskell, Louise Martin and June Barker Biggs; 2 nieces, Shirley Lou Zeunen and Kay Lynn Wells and nephew Douglas Barker. Brent is survived by his wife Karen of 61 years; son, Mark Johnson and wife Chris of Ainsworth and their children Nathan and wife Kristen and grandchildren Carter and Alli; Tyler and wife Nicole and grandsons Leighton and Slate; Lane and wife Shelby and granddaughter Willa. Daughter, Kathy Jochem and husband Greg of Ainsworth and their daughters Brittany Griffel and boyfriend Nick Shannon and granddaughters Addisyn and Kinsley; Katie and husband Jeremiah Meyer and grandson Luke. Daughter, Beth Nichols and husband Jim of Litchfield, NE and their daughters, Ericka and husband Dexter Goodner and grandchildren Grey and Hayze; Kelsey and husband Riley Ruzicka and grandchildren Riggs and Cash; twins, Caleb Unick and McKenna Unick, Ashley Nichols, and Clayton Nichols; twin brother, Bruce and wife Jeane of Ainsworth; sister-in-law, Sharon and Jay Stombaugh of Lexington, NE, along with a host of nieces, nephews, cousins and friends. Brent passed away at Faith Regional Hospital in Norfolk, NE, on Sunday, September 19, 2021, at the age of 85. Funeral Services were held on Thursday, September 23, 2021 at the Ainsworth United Methodist Church with Pastor Martin Leeper officiating. Special Remarks/Reflections were given by Charlie Kyser and Connie Goochey. Special memories from family and friends were read by Pastor Leeper. Prelude music was provided by Kim Bejot. A congregational hymn, “The Old Rugged Cross,” was sung. The CD Selections played were, “Jealous Of The Angels” by Donna Taggart, “I Want To Stroll Over Heaven With You” by Alan Jackson, “Far Side Of Jordan” by Jimmy Fortune and “Grandpa, Tell Me ‘Bout The Good Old Days” by the Judds”. Interment followed in Ainsworth Cemetery. Casket Bearers were: Nathan Johnson, Tyler Johnson, Lane Johnson, Caleb Unick, Jeremiah Meyer, Dexter Goodner, Riley Ruzicka, Clayton Nichols and Nick Shannon. Honorary Casket Bearers were all of Brent’s granddaughters and great-grandchildren. Family members, Kyle Krula and Colt Temple assisted the Ainsworth American Legion Post #79 with Military Honors. Memorials were suggested to the American Legion Post #79 Baseball Program, Gideon’s International, the Johnstown United Methodist Church or to the Donor’s Choice in Brent’s name. Hoch Funeral Home of Ainsworth was entrusted with the service arrangements. Online condolences may be left for the family at www.hochfuneralhome.com.

In the winter of 1936 during a raging snow storm Brent Edwin Johnson was born to Earl and Edith (Greene) Johnson on January 28, 1936 in the Marshall house south of the tracks at Johnstown, NE on Main Street. Shortly after (7 min) twin brother... View Obituary & Service Information

The family of Brent E. Johnson created this Life Tributes page to make it easy to share your memories.

In the winter of 1936 during a raging snow storm Brent Edwin...