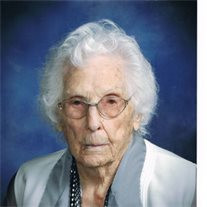 Blanche Marie Millard was born February 20, 1913 near Meadville, Nebraska to Lee and Lela (White) Millard. She was the oldest of five children. She was raised in Keya Paha County and in the Mission, South Dakota area. She attended high school in Keya Paha County. Blanche married Alvie McCoy at Custer, South Dakota on October 10, 1928. To this marriage was born two sons, Newell Lavern in 1930 and Dale Eugene in 1932. After the marriage ended in divorce, Blanche, needing to provide for her family, worked for the Frank Niehus family, Harry and Lucille Titus, and then went to work for Willard and Gail Schroeder in 1939. She helped in the house as well as outside with the ranch operation. During the 30's and the World War II years, times were hard and the days were long and exhausting. Summer days were spent making hay, and the evenings were spent working in the garden and putting up canned goods to feed the family during the winter months. Feeding and caring for the cattle involved many long, cold winter days. Blanche lived and worked on the Schroeder ranch until Willard passed away in 1975. Shortly thereafter Gail moved into Springview, and Blanche continued to ranch by herself until February 1977 when grandson Mike joined her in the operation. Together they raised Black Angus cattle until 1993 when they dissolved the partnership and moved into Springview where Blanche retired at 80 years of age. She maintained her cattle herd for several more years before dispersing the herd in 2000. Blanche was heard to remark on many occasions that nothing was more important to her than her family, a fact that she demonstrated each and every day. No matter how busy she was, she always had time to have some fun with the grandkids or cuddle a newborn grandchild. Each one of them felt special when they were with her because she thought they were special and treated them as they were. She was always ready with a helping hand and wanted to meet any need there might be in any of their lives. In addition to work and family, Blanche spent many hours crocheting, quilting, and reading. She was determined to keep her mind sharp, (and she did) by working crossword puzzles. At the age of 95 she tackled Sudoko but finally admitted that she had met her match after wearing out the erasers on several pencils. When hand-held calculators became popular someone had given her one. She used it to figure her checkbook, and then did the process by hand just to double-check the calculator. In later years, Blanche spent many hours talking of days gone by. She was good on details and could remember so much of what had happened in her childhood. Because of this, the family history was passed down to the younger generations. Blanche celebrated her 100th birthday in February 2013 with a family get-together and an open house. She was proud of the fact that she had attained that milestone in her life. Seven weeks short of her 101st birthday, she passed away peacefully on January 2, 2014 at the Gregory Hospital with her son at her side. Blanche was preceded in death by her parents, Lee and Lela Millard; three sisters, Odetta Miller, Dorothy Hamilton, and Doris Millard; one brother Emmert Millard; son Dale at age 16; one great grandson, Tyler Bowers; both sets of her grandparents and her special cousin, Madeline Mulhair. She is survived by her son, Newell of Springview; grandsons Mike (Sandi) of Springview and Chad of Yankton, SD; granddaughters Teresa (Steve) Lanz of Lincoln, Connie Zastrow of Norfolk, and Cara Bowers, Ainsworth; 14 great grandchildren Heather (Lance) Hespe, April (Bobby) Shaw; Michael (Sarah) McCoy, Teri (Michael) Schneider, Nicole Gerhardt, Dacy (Jess) Hoyt, Paul (Joanna) Lanz, Brittany Zastrow, Savannah Zastrow, Caitlyn (Tucker) Iverson, Jami Haskell, Halli Haskell, Dylan McCoy and Mikalie McCoy; and 17 great-great grandchildren; numerous nieces and nephews and a host of friends. Funeral services were held January 8, 2014 in Springview with Rev. Jesse Meduna officiating. Pre/Postlude music was provided by Kristen Meduna, and special instrumental selections of "In The Garden" and "Amazing Grace"were provided by Stan Libolt and accompanied by Kristen Meduna. Pallbearers were Great-grandsons, Lance Hespe, Bobby Shaw, Michael McCoy, Michael Schneider, Jess Hoyt, Paul Lanz and Tucker Iverson and Great-great grandsons Matthew McCoy and Caleb Hespe. Burial was in the Mount Hope Cemetery at Springview. Hoch Funeral Home of Ainsworth was in charge of the arrangements.

Blanche Marie Millard was born February 20, 1913 near Meadville, Nebraska to Lee and Lela (White) Millard. She was the oldest of five children. She was raised in Keya Paha County and in the Mission, South Dakota area. She attended high school... View Obituary & Service Information

The family of Mrs. Blanche M. McCoy created this Life Tributes page to make it easy to share your memories.