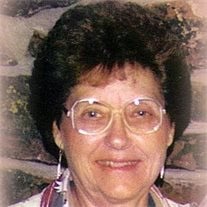 Blanche (Becker) Gudgel, of Ainsworth Nebraska passed from our earthly realm on April 6, 2014 at the Brown County Hospital in Ainsworth Nebraska. Blanche was born the daughter of Henry G. and Cecelia (Flowers) Becker on December 12, 1923 in Valentine Nebraska. She attended Cherry County's Prairie View Elementary District 33 and then went on to graduate from Valentine High School, class of 1942. At Valentine high, Blanche received her 3 year teaching certificate upon graduation. After high school Blanche taught school for 3 years in Cherry County at the 130 North School, south of Wood Lake, Nebraska, and the District 9 Simeon School, south of Valentine. Blanche then attended Chadron State Teachers College for her teaching recertification. After attending Chadron State, she taught at the school in the Village of Nenzel, Nebraska. On May 3, 1946 at Chadron, Nebraska, Blanche Becker married the love of her life, William "Bill" Gudgel of Johnstown Nebraska, upon his return from his patriotic duties in World War II. Together they made their home on one of the original Gudgel ranches south of Wood Lake, Nebraska. To this union were born 2 children; first in 1947, a daughter who passed in childbirth and in 1949 a second daughter, Barbara. In 1949 Bill and Blanche bought the Calver Place, south of Johnstown where they lived and ranched for 52 years. In 2001, after the sale of the ranch, the Gudgels' moved to a home purchased in 1988 in Ainsworth Nebraska. Bill and Blanche were inseparable. They worked side by side to build a successful ranching operation, so much so that Blanche often referred to herself as Bill's "hired man," (a title that she was proud to bear.) It would not have been unusual to see Blanche in the hayfield raking and mowing, climbing windmills, working cattle, as well as gardening, taking care of domestic responsibilities, as well as raising a daughter. Blanche was a proud charter member of the VFW Auxiliary in Ainsworth, the Jewel Rebekah Lodge #319 in Ainsworth and Long Pine Nebraska, as well being a life member of the Brown County Foundation. Blanche (Becker) Gudgel was preceded in death by her parents, a baby girl, 1/2 sister, Marie B. Kates, grandson Darrel, and her husband William "Bill". She is survived by her daughter, Barbara (Gudgel) Anderson of Ainsworth; sisters-in-law, Pearl Brokofsky of Grand Island Nebraska, Ida Belle Fernau and husband Lavern of Nampa Idaho, Sharron Jochem and husband Dean of Ainsworth, Sherrill Hershiser and husband Robert (Bob) of Baldwin City Kansas; Brother-in-law, Jack Gudgel of Scottsbluff Nebraska; as well as many wonderful nephews, nieces, grand-nephews and grand-nieces, as well as great-grand-nieces and great-grand- nephews. She is survived as well, by many close friends and neighbors whom she loved very much. Blanche will be dearly missed by all who knew her. Funeral services were held on April 11, 2014 at the Evangelical Free Church in Ainsworth, Nebraska with Pastor Mick Thornton and Pastor Bruce Beebout officiating the service. Music was provided by Marjorie Wilkins & Joe McBride. Special music selections of "The Keeper of the Stars" and "On The Wings of a Snow White Dove were provided. Special remarks were given by Chris Gudgel. Pallbearers were, Gene Buechle, Jim Pinney, Greg Wales, Dan Clapper, Gary Wolfe and Chris Gudgel. Honorary bearers were all of Blanche's nephews. Burial was held at the Ainsworth Cemetery. Memorials were directed to the family in her name for a future designation. Hoch Funeral Home of Ainsworth was in charge of the arrangements.

Blanche (Becker) Gudgel, of Ainsworth Nebraska passed from our earthly realm on April 6, 2014 at the Brown County Hospital in Ainsworth Nebraska. Blanche was born the daughter of Henry G. and Cecelia (Flowers) Becker on December 12, 1923 in... View Obituary & Service Information

The family of Mrs. Blanche (Becker) Gudgel created this Life Tributes page to make it easy to share your memories.

Blanche (Becker) Gudgel, of Ainsworth Nebraska passed from our...