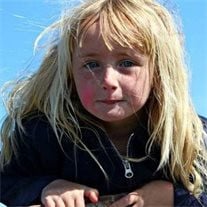 Bit Reins Painter was born on August 12, 2010 at the Cherry County Hospital, in Valentine, Nebraska, to Monty and Angie Painter, of Springview, Nebraska. "Little Bit" was an extraordinary cowgirl, from her "one of a kind name" to her quick wit and determination to do anything she tried. With her freckles, sparkling blue eyes and untamed blonde hair (she would rather not have brushed,) Bit never left a stone unturned, and acquired the nickname "Messer." True to the Painter name, Bit never met a stranger. She knew most people in Springview and the surrounding area by name, where they lived, and what kind of vet work she had helped her mom do for them. Bit was her Grandma Roberta's companion on trips downtown on her pink bike, shopping in Ainsworth, and even helping unpack boxes at the Turbine Mart. Bit loved people. She didn't just want to go in to the post office or the bank or Power and Performance to get a sucker, she stopped because she wanted to say "Hi", (the sucker was just a bonus and she usually made sure she picked up one for her brother and sister.) Everything was dropped if she could go with her dad and ride her horse "Tig." Bit loved animals, especially horses, she loved to ride, (the faster the better.) The red heeler dog "Joe", was very tolerable of the regular syringes full of water and Smarties candy, that Bit encouraged him to take. A highlight of Bit's week was AWANA club, after completing one of the lessons with her mom, she prayed and asked Jesus to be her Savior. Bit passed away on July 12, 2015, in the Brown County Hospital, at Ainsworth, Nebraska from injuries suffered in an ATV accident. Bit joins in heaven her sisters, Dally Lou and Derby Jean, Aunt Karma Painter, Grandpa Keith Bartos and Grandpa Larry Painter. Bit Reins is survived by her parents Monty and Angie Painter; brother, Cinch, sister, Kit; Grandma Roberta Painter, Grandma Nancy Bartos and adopted Grandpa Randy Soleta; Great-grandmothers, Mildred Painter, Leanore Bartos and Norma Morrill; Uncles and Aunts, Ben Painter and Brenna, Bryon and Kelly Painter, Jake and Lana Bartos, Jemi and Brent Frederick, and Chip Bartos. Cousins, Heidi, Riley, Laree, Brady, Gus, Bryce, Morgan, Cora, Harris, Aida, Payton, Tripp, Zoey and Pistol. Honorary Grandparents, Steve and Paula Crouse, honorary Aunts and Uncles, Will and Jamie Miller and Kevin and Beth Lindwurm, and a host of friends. When Bit was asked what she wanted to be when she grew up, her response was "A Cowgirl"….and she was. Graveside services were held on Friday, July 17, 2015 at the Mt. Hope Cemetery near Springview, Nebraska, under the direction of Hoch Funeral Home of Ainsworth. Pastor Tim Wyrick officiated the service. Honorary bearers were all of Bit's family and friends. A song entitled, "A Visitor From Heaven" by Twila Paris was provided. Memorials were suggested to the family for a future designation.

Bit Reins Painter was born on August 12, 2010 at the Cherry County Hospital, in Valentine, Nebraska, to Monty and Angie Painter, of Springview, Nebraska. "Little Bit" was an extraordinary cowgirl, from her "one of a kind name" to her quick... View Obituary & Service Information

The family of Miss Bit Reins Painter created this Life Tributes page to make it easy to share your memories.