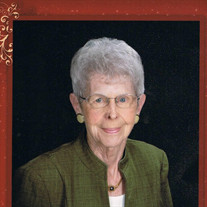 Betty Jane (Scripter) Wasson was born on March 18, 1930 at Valentine, Nebraska to Joseph and Florence (Andrus) Scripter. She passed away in Norfolk, Nebraska on October 9, 2018 at the age of 88. Betty was raised in Atkinson,Nebraska with seven siblings Joe, Helen, Marjorie, Bobby, Charles, Gene and JoAnn. As a young girl she worked as a maid for other families washing dishes and cleaning houses. She was a soda jerk at the local confectionery and in 1948 she was crowned Atkinson Hay Queen. She graduated in 1949 and married Albert Wasson on July 1, 1949. Albert and Betty made their home on a farm north of Atkinson. To this union six children were born, Jeanette, Myron, Janet, Sally, Joyce and Jane. Albert and Betty eventually relocated to Ainsworth, Nebraska in 1967 where they lived the rest of their lives. Betty loved her children, grandchildren, great-grandchildren, neighbors, and friends. Her motto was to brighten the little corner of the world where she lived, and she did it well. She enjoyed hosting family and friends for a large meal or cup of coffee. The Christmas china came out in December and stayed until February so she could entertain anyone who might pop in. With the help of her neighbor Brenda she turned a corner of her yard into a flowerbed to cheer those who passed by. In her lifetime, she baked thousands of sugar cookies, made hundreds of “Jello Fluff” salads, and wrote or delivered notes and cards with “treat money” tucked inside. Betty’s trademark birthday cards came with bills or a check in the amount of the age of the recipient. This is one of the few things that made turning older a good thing. Betty liked sending flowers in the form of “stamps” instead of the traditional bouquet. She herself went through countless stamps writing and sending cards, notes, crossword puzzles, the church bulletin or articles from the Ainsworth Star Journal to her family. She was involved with her church, (Ainsworth United Methodist Church) serving snacks at Kids Zone, participating in Morning Circle and as an active member of the United Methodist Women. She especially loved her Tuesday afternoon Bible study group and the time spent at Pizza Hut following the study with her dear friends. During Betty’s lifetime she modeled how to live selflessly, serve wholeheartedly, treat others equally, and love deeply. She lived by her favorite verse: This is the day the LORD has made, let us rejoice and be glad in it. Psalm 118:24 Betty is preceded in death by her parents, her husband Albert, three sisters, three brothers, daughter Jeanette Kliment, son-in-law, Dennis Kliment, and granddaughter Laura Kliment Martinson. She is survived by her brother Charles Scripter of North Platte, Nebraska; her son Myron (Patsy) Wasson of Hadar, Nebraska, daughters, Janet Graham of Springfield, Nebraska, Sally (Dick) Wallace of O’Neill, Nebraska, Joyce (Kevin) Thornton of Valentine, Nebraska, and Jane Wasson of Ainsworth; 16 grandchildren, and 32 great-grandchildren, nieces, nephews, and cousins. Funeral Services were held on October 12, 2018 at the United Methodist Church in Ainsworth, Nebraska with Pastor Jim Loutzenhiser officiating the service. Music was provided by Sherry Campbell. Special music selections of “In the Garden” being provided by Kayla Nilson and CD selections of “Supermarket Flowers” by Ed Sheeran, and “There You’ll Be” by Faith Hill. Pallbearers were Darrin Kliment, Thad Wasson, Toby Wasson, Logan Graham, Jacob Thornton, Luke Wallace, and Corky Thornton. Honorary bearers were all of Betty’s other grandchildren and great-grandchildren, family and friends. A Graveside Service followed at 2:00 PM at the Woodlawn Cemetery at Atkinson, Nebraska under the direction of Hoch Funeral Home of Ainsworth. In lieu of flowers memorials were suggested to the Sr. Center or to the Ainsworth United Methodist Church.

Betty Jane (Scripter) Wasson was born on March 18, 1930 at Valentine, Nebraska to Joseph and Florence (Andrus) Scripter. She passed away in Norfolk, Nebraska on October 9, 2018 at the age of 88. Betty was raised in Atkinson,Nebraska with... View Obituary & Service Information

The family of Mrs. Betty J. Wasson created this Life Tributes page to make it easy to share your memories.