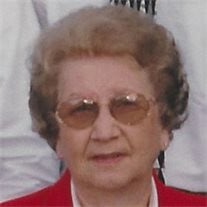 Betty June Snover was born September 26, 1923 to Lawson and Bessie (Gardner) Monk in Percival, Iowa. She grew up along the Missouri River. Her father was a farmer and fisherman on the Missouri River. They dressed lots of fish for delivery to markets. When the floods came in the spring, her father took the kids to school in his boat. She played basketball and baseball and had a three mile walk home after practice. She was an avid baseball and football fan, her whole life. She graduated from Percival High School in 1941 and teachers college in Tarkio, Missouri in 1943. While attending college in Tarkio, she met the love of her life and future husband, Reid Snover. After graduation, while Reid was in the US Navy, she moved to Omaha and worked for Union Pacific Railroad until she and Reid were married on May 3, 1944. They made their home in North Bend, Nebraska, farming with Reid's father. To this union two daughters were born, Sheryl in 1945 and Paige in 1946. In the fall of 1947 they purchased a ranch southeast of Ainsworth, and loaded up their two baby daughters and moved to the ranch. She, like many other strong women of this era, survived the blizzards of winter, (the blizzard of 1949 in particular) the heat, wind, bad roads, floods of the early 50's, calving, haying, and cooking for lots of hay help, with few modern conveniences. They remained on the ranch until both daughters were in school and then, like many other families, bought a house in town to make it easier for the girls to attend school. Betty was very active in community, school and church activities. There were always lots of Sheryl and Paige's friends welcome in their home. She made the very best homemade pizza and she never knew how many additional kids would be there for meals. She was active in PTA, a 4-H leader for years and taught many girls how to sew and cook. She was a charter member of the Brown County Hospital Auxiliary, a charter member of the JR. Women's Club, which started the Christmas Lighting Project and the Annual Christmas Pageant in the city park. (At that time the pageant was outside, and featured live animals, and was very cold some years.) She worked on the committee to organize the funding and building of the Ainsworth Swimming Pool. She was on the election board for many years. She was a past Deacon and a Trustee of the Congregational United Church of Christ, and past president and long time member of the Congregational Woman's Fellowship. She and Reid played golf and lots of cards, especially Bridge. (Betty was a very serious Bridge player.) She and Reid took a trip to England to visit Reid's cousin, Ellen, and her family in 1970. Reid passed away suddenly in 1978, and Betty needed "more to do." She went to work for Dr. Floyd Shiffermiller and then Dr. Melvin Campbell in the Ainsworth Family Clinic submitting insurance claims for patients. Even though she was employed full time, she still had time to make pies and the best chocolate cake ever for brandings, birthdays, and family gatherings. She made at least 40 pies each fall to eat and to put in the freezer. (Apple and peach were her specialties.) She enjoyed her grandchildren and great-grandchildren and attending their school and sports activities. Betty looked forward to the annual trip to visit Paige in Minnesota each fall. She enjoyed a special cruise trip to Alaska in 2000 with Paige, her sister Letha, and Sheryl, to celebrate Betty and Letha's birthdays. Betty's life changed in 2011 when she suffered a major stroke. She then made her home at the Ainsworth Care Center where she made many friends with the staff, residents, and renewed old friendships. Betty went to the Lord peacefully on April 1, 2015 at the Ainsworth Care Center. She is survived by daughters, Sheryl Graff of Ainsworth, and Paige Snover of Mankato Minnesota; two grandsons, Todd (Bobbie) Graff of Ainsworth, and Terry Graff and special friend Jill Hudson of Long Pine Nebraska; five great grandchildren, Joshua (Krista) Graff of Olive, Montana, Brady Graff of Ainsworth, Morgan (Rob) Heiman of Gillette, Wyoming, Sydney Graff and Dylan Graff of Long Pine; two great-great-granddaughters, Adalyn Heiman and Mesa Graff; sisters, Letha Bayes of Spokane, Washington, Chlorina (Bill) Fitzwater of Villisca, Iowa, Carol Collins of Nash, Texas; brother, Frank Monk of Council Bluffs, Iowa. Many nieces, nephews, and a host of friends. Funeral services were held on Monday, April 6, 2015 at the Congregational United Church of Christ in Ainsworth, Nebraska with Pastor Neva Murphy officiating the service. Music was provided by Sherry Campbell and Lisa Wiebesiek. Vocal selections were, "In The Garden" and "How Great Thou Art," with the congregational selection being "Amazing Grace." Pallbearers were, Todd Graff, Terry Graff, Brady Graff, Josh Graff, Mark Snover, Rob Heiman and Clayton Snover. A graveside service was held on April 7, 2015, at the Woodlawn Cemetery near North Bend, Nebraska. Rev. James G. Goble officiated the service. Pallbearers in North Bend were, Terry Snover, Gary Mitties, Mark Snover, Clayton Snover and Josh Graff. Memorials were directed to the Congregational Church Women's Fellowship, the Brown County Hospital or to the Donor's Choice in Betty's name. Arrangements were handled through Hoch Funeral Home of Ainsworth, with the assistance of Moser Funeral Home of North Bend, Nebraska.

Betty June Snover was born September 26, 1923 to Lawson and Bessie (Gardner) Monk in Percival, Iowa. She grew up along the Missouri River. Her father was a farmer and fisherman on the Missouri River. They dressed lots of fish for delivery to... View Obituary & Service Information

The family of Mrs Betty June (Monk) Snover created this Life Tributes page to make it easy to share your memories.