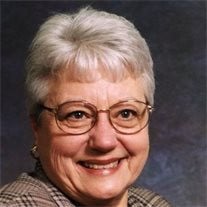 Betty Louise Bower was born on May 18, 1938 to Darrel and Lois (Best) Bower at Ainsworth, Nebraska. She went to her heavenly reward on Sunday, November 20, 2016 from heart complications at the Brown County Hospital at the age of 78 years. Betty attended 12 years of school in Ainsworth and graduated with the Class of 1956, and was so excited to have celebrated her 60th year class reunion this past summer. After graduating from Ainsworth High School she attended two years of college at Nebraska Wesleyan in Lincoln, Nebraska where she was a member of the Delta Zeta Sorority. Among being a sports fan for many sport activities, nothing excited her more than watching the Ainsworth Bulldogs and the Nebraska Cornhuskers competing in competition. No matter what was called you would never want to argue with her as she would win…with that being said, she will never have to worry about not getting the best seat in the house as she will be there!! Betty was baptized in the United Methodist Church and her faith in God was nurtured throughout her life. She was proud to be a 68 year member since March 21, 1948. Betty was also involved in the United Methodist Women where she was currently serving as secretary. She married the love of her life Dale Kirkpatrick on June 14, 1959. To this union were born 3 children, Kelly, Susan, and Darren. In the early years of marriage, Betty worked at JC Penney prior to opening their own establishment in May of 1965 known as Kirkpatrick Furniture where they worked side by side until closing the furniture business in 1984, then relocated with Kirkpatrick Floor Covering and retired in 1992. Her pride and joy were her grandkids, Jeremy, Nathan, Nicholas, Britney, Derek, Baily, Ashley, and Alli. She very seldom missed any of their activities. Always yelling, "Dale, where's your camera!" She had a picture book in her purse to brag about new great grandbabies. Addison, Brayden, Lily, and Harper. Betty was very active in her community and donating time to many organizations. She loved Eastern Star and held many offices at the local and state levels serving as a Worthy Matron in Ainsworth. She participated in PEO, Sandhills Discovery, Brown County Foundation and the Hospital Auxiliary. Betty enjoyed spending numerous and countless days with Dale at their cabin on Clear Lake. The time spent there together establishing their cabin was how Betty enjoyed life to the fullest…Life Is Good!! Left to cherish her memories are her husband Dale of Ainsworth, daughters Kelly (Curt) of Elm Creek, Nebraska, and Susan (Bryan) Stec of Valentine, Nebraska, son Darren (Karma) of Broken Bow, Nebraska. Eight grandchildren, Jeremy (Stacy) Stec, Nathan (Lyn) Stec, Nicholas Stec, Britney (Brandon) Zakrzewski, Derek Foster, Baily Kirkpatrick, Ashley Kirkpatrick and Alli Kirkpatrick; four great grandchildren, Addison, Brayden, Lily, and Harper; brother, Wayne and sister-in-law, Cindy Bower of Ainsworth; niece, Tammy (Diego) Ayala and nephew Tom (Betty) Bower. Numerous friends that were touched by her caring heart, infectious laughter and her willingness to help others in time of need. Betty was preceded in death by her parents, Darrel and Lois Bower, mother and father-in-law, Wayne and Helen Kirkpatrick, and infant granddaughter Jessica Marie Foster. Funeral services were held on November 23, 2016 at the United Methodist Church in Ainsworth, Nebraska. Pastor David Randall officiated the service. Music was provided by Sherry Campbell and Kayla Nilson. Special selections of "How Great Thou Art" and "Amazing Grace." Casketbearers were, Britney Zakrzewski, Derek Foster, Jeremy Stec, Nathan Stec, Nicholas Stec, Baily Kirkpatrick, Ashley Kirkpatrick and Alli Kirkpatrick. Honorary bearers were, Stacy Stec, Lyn Stec, Brandon Zakrzewski, Addison Stec, Brayden Stec, Harper Stec, and Lily Stec. Organizational Rites were conducted by the Bethany Eastern Star Rites and BM P.E.O. Burial followed at the Ainsworth City Cemetery, Ainsworth, Nebraska. Hoch Funeral Home was in charge of the arrangements. Memorials were suggested to the Brown County Foundation or to the United Methodist Church of Ainsworth.

Betty Louise Bower was born on May 18, 1938 to Darrel and Lois (Best) Bower at Ainsworth, Nebraska. She went to her heavenly reward on Sunday, November 20, 2016 from heart complications at the Brown County Hospital at the age of 78 years. Betty... View Obituary & Service Information

The family of Betty L. (Bower) Kirkpatrick created this Life Tributes page to make it easy to share your memories.