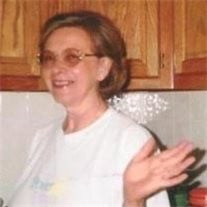 Betty Jo (Kasparie) Calif, born September 16, 1944, in Boulder, Colorado to Theodore Roosevelt Kaspari Sr. and Lizzie Fern (Hawkins) went to be with her Lord Jesus Christ on December 12, 2014. Betty graduated from Erie High School in 1963 and married Jerry Morgan in Erie Colorado that same year. Added to this union were two sons and one daughter; Lonnie, Ronnie, and Janet. Over the next 30 years they raised their family and traveled together through many adventures to include "living off the grid" for a period of time in the mountains of Montana. Betty later married Gene Calif on March 20, 2004 to present. Together they served God and the community of Long Pine, Nebraska where Betty was well-known and loved by all. Nothing made Betty happier than spending time with her family and friends and dedicating herself to helping others. Her happy welcoming demeanor will live on in the memories of all that knew her. Betty was preceded in death by her father in 1989, her mother in 1998, her brother, Paul Revere in 1949, her brother Theodore in 2013, and great-grandson, Carson in 2006. She is survived by her sons and daughter, Lonnie (Robin) Morgan of Helena, Montana, Ronnie (Maggie) Morgan of Missoula, Montana, and Janet (Dean) Smith of Topeka, Kansas; brothers, John Kaspari of McPherson, Kansas, George "Andy" (Mary Ann) Kaspari-Hofferber of Fort Collins, Colorado, William "Bill" Kaspari-Hofferber of Grand Junction, Colorado; nine Grandchildren, Jamie, Jackie, Lonnie Jr., Roni, Laurie, Katie, Lacy, Danielle, and Megan; four great-grandchildren, Travon, Hailey, Gracie, and Blake, and numerous nieces and nephews. Memorial Services were held on Tuesday, December 16, 2014 at 1:30 at the Assembly of God Church in Ainsworth, Nebraska with Pastor Gary Graesser officiated at the service. Music was provided by Myra Williams, Marjorie Wilkins and Charity Fay. A Private Family Inurnment will be held at a later date in the Grandview Cemetery at Long Pine. Memorials were suggested to the Ainsworth Assembly of God Church. Hoch Funeral Home was in charge of the arrangements. Online condolences may be made at www.hochfuneralhome.com

The family of Mrs. Betty Jo (Kaspari) Calif created this Life Tributes page to make it easy to share your memories.