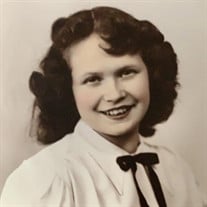 Betty Jean Fernau, age 88, of Ainsworth, Nebraska left this earthly life Tuesday, March 2, 2021 at the Brown County Hospital in Ainsworth. She was born April 29, 1932 in Lincoln, Nebraska to Edward Fred Greenough and Harriett L. (Witt) Greenough. Betty graduated in 1950 from Ainsworth High School. On June 5, 1951 she married the love her life for 70 years, Donald R. Fernau at Ainsworth. To this union, a son, Ronald Ray, was born on February 8, 1955. As a young woman, Betty taught school at Moon Lake south of Johnstown, Nebraska. She rode horse back to school daily. In her later years, Betty worked as a dispatcher for the Brown County Sheriff's Office. Betty's love for her family was as strong as she was. She enjoyed having her grandchildren with her as much as possible, always finding a way to spoil them. Betty enjoyed playing pitch with her family, drinking her cappuccino, and playing scratch tickets. She always had a smile on her face that would brighten anyone's day and was always proud of her family. Betty was preceded in death by her parents; and two brothers, Larry Greenough and Edward “Corky” Greenough. She is survived by her husband, Donald Fernau of Ainsworth; son, Ronald Fernau of Ainsworth; five grandchildren, six great-grandchildren and four great-great-grandchildren; one brother, Jerry Greenough and wife, Shirley of Aurora, Nebraska; a sister-in-law, JoAnn Greenough of Lusk, Wyoming; along with nieces, nephews and other family members. Memorial Services were held on Friday, March 26, 2020 in the Hoch Funeral Home of Ainsworth. Pastor Russell Thayer officiated at the services. The CD Selections of “Amazing Grace” & “Old Rugged Cross”, both by Alan Jackson were played. Inurnment will be in the Ainsworth Cemetery. Memorials were suggested to the family in Betty’s name for future designation.

The family of Betty J. (Greenough) Fernau created this Life Tributes page to make it easy to share your memories.