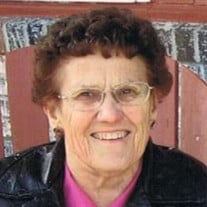 Betty June (Brown) Christensen was born June 19, 1927 to James Price Brown III and Lena E. (Bishop) Brown at Newport, NE and went to her Heavenly home on July 26, 2021 at the Rock County Hospital in Bassett, NE. Betty attended school at the Mariaville School then Bassett High School and graduated from Newport High School in 1945. She taught at a rural school for one year after graduation. Betty was joined in marriage to Elmer Dee Christensen on her 19th birthday, June 19, 1946 and to this union two daughters were born-Myrna Dee on November 6, 1947 and Lonna Rae on April 7, 1951. Betty was very active in the Newport Garden Club, Eureka Valley Extension and Newport Nightin’ Gals clubs and bowling in Bassett. She was the Newport village clerk for several years and sold Vanda cosmetics. She was also a volunteer for the American Heart Society and Cancer Society raising funds for both organizations. Elmer and Betty were involved in the remodel of the Newport Gym in the 1950’s. Betty worked tirelessly to raise money for a new fire hall for the Newport Volunteer Fire Department and enjoyed seeing and using the new building. Betty helped Elmer and her brothers-in-law, John and Raymond, with their haying business by cooking for the hay crew. She had many stories to tell about the places they “camped” while they were haying and learning how to cook in the early years of their marriage. Flowers and gardening were a big part of Betty’s life. She enjoyed canning the vegetables that Elmer grew and sharing their bountiful garden with everyone. Everyone that knew Betty very well, knew that Jeopardy was on at 4:30 and if you called or showed up at that time, you may have a very short conversation! She was preceded in death by her parents, Jim and Lena Brown; husband, Elmer Christensen; Parents-in-law, Pete and Pearl Christensen; siblings, Robert (Bob) Brown, Richard (Dick) Brown and Clea Rae Lange; grandson, Scott Everett Stewart; granddaughter Carolyn Dee Stewart; great great-grandson Klay Norris Broders. Betty is survived by daughters, Myrna (Everett) Stewart and Lonna Allison all of Newport, NE; grandchildren, Christina (Lance) Stewart Buoy of Hildreth, NE, Cheri (Gary) Stewart Broders of Newport, NE, Vance (Brandi) Allison of Lincoln, NE, and Trent (Emily) Allison of Hershey, NE; great-grandchildren, Ashley (Adam) Buoy Stauffer of Bloomington, MN, Andrew (Victoria) Broders of Lincoln, NE, Chase Broders of Newport, NE, Owen & Kyan Allison of Lincoln, NE, and Trey, Kelsie, and Caleb Allison of Hershey, NE; siblings, Naomi Frizzell of Bassett, NE, Norma Stoeger of Valentine, NE, Jean Mohanna of Grand Island, NE, and Larry (Nancy) Brown of Fremont, NE. Funeral Services were held on Monday, (August 2, 2021) at the United Methodist Church in Bassett with Pastor Jeanie Leeper and Pastor Dennis Quigley officiating at the service. Special reflections were given by Lonna Allison and Rod Stolcpart. The CD Selections of “Far Side Banks Of Jordan” by Jimmy Fortune, “In The Time That You Gave Me” by Joey and Rory & “Love Remains” by Collin Raye were played. Interment followed in Willowdale Cemetery north of Newport, Nebraska. Casket Bearers were: Keith Allison, Shannon Heyden, Dan Judge, Neil Ammon, Rich Munk and Jerry Doke. Memorials were suggested to the Newport Volunteer Fire Department, RCHS Foundation (Elmer and Betty Christensen Memorial Scholarship) or to the donor’s choice in Betty’s name.

The family of Betty J. (Brown) Christensen created this Life Tributes page to make it easy to share your memories.