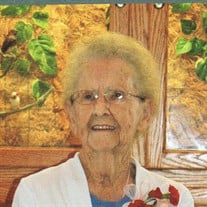 OBITUARY OF BETTY C. (POUND) CAULFIELD Betty Carroll Caulfield was born on April 15, 1927 to Carroll Alfred and Margret Marie (Lowe) Pound. She was their eldest child, followed by her brother, Dale. Betty passes away on December 18, 2020. She went to grade school in a small one room school near the Pound Ranch west of Brownlee. She went to high school in Thedford, graduating in the spring of 1944. In the fall of 1944, she went to college at LSU staying with an Aunt and Uncle for a year. She studied music and became a very accomplished pianist. She returned home to teach in area country schools, staying with local rancher families. One family she stayed with invited a local ranch hand to supper. His name was James “Jim” Caulfield. On April 6, 1946, they eloped to Kansas to be married. To this union two children were born, Ternie in April 1948 and Richard in August 1949. She quit teaching after the children were born. She cooked in several ranch cookhouses, was a good cook, raised a big garden, lots of canning and had chickens. She was always available to accompany anyone with the piano. Betty and Jim bought a ranch west of Oconto in 1965. In 1971, Betty went to school to do income tax and worked for Ternie and her husband, Laron, for a few years before opening her own office in Ainsworth. In 1973, Jim and Betty, along with her son, Richard and Linda purchased a ranch north and west of Springview. In later years, Betty moved her tax office to the ranch. Jim passed away in July 1999 and Betty moved into Springview in 2002 and put her office in a small house in Springview. She sold her business in 2006. In early 2015 Betty moved to Broken Bow to assisted living, where she really enjoyed living in there and made a lot of friends. She fell in June of 2018 and broke her hip and moved to Rose Lane Home in Loup City in July 2018, as she needed more care than the assisted living provided. Her pride and joy were her grandchildren and great-grandchildren. She loved to attend as many of her grandchildren’s events as possible. Preceding her in death was her husband James; parents; brother, Dale; and sister-in-law Jennie; five brother-in-laws; and four sister-in-laws. She leaves to mourn her passing her daughter, Ternie Wright; son, Richard (Linda) Caulfield; grandchildren, Tony (Stephanie) Wright, Tresa (Steve) Bass, Timothy (Heather) Wright, Greg Caulfield, Jamie (Will) Miller, Joe (Bradee) Caulfield; fifteen great-grandchildren; and one great-great Grandson; nieces, nephews, extended family, and a host of friends. A Private Family Funeral Service wsd held on Saturday, December 26, 2020 at the United Methodist Church in Springview. Pastor Jenice Epp officiated at the service. Guitar and vocal selections were sung by Ashley Miller, “In The Garden” and “Jealousy Of The Angels/” The cemetery song was “The Old Rugged Cross.” Casketbearers were: Tony Wright, Tim Wright, Steve Bass, Greg Caulfield, Will Miller and Joe Caulfield. Internment followed in the Mt. Hope Cemetery at Springview, Nebraska. Memorials were suggested to the Rose Lane Home in Loup City, the United Methodist Church of Springview or the Springview Activity Center in Betty’s name. Arrangements were under the direction of the Hoch Funeral Home of Ainsworth and online condolences may be left for the family at www.hochfuneralhome.com.

OBITUARY OF BETTY C. (POUND) CAULFIELD Betty Carroll Caulfield was born on April 15, 1927 to Carroll Alfred and Margret Marie (Lowe) Pound. She was their eldest child, followed by her brother, Dale. Betty passes away on December 18, 2020. She... View Obituary & Service Information

The family of Betty C. (Pound) Caulfield created this Life Tributes page to make it easy to share your memories.