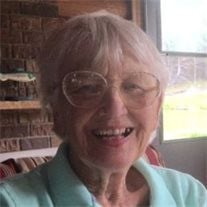 Betty Ann Camilla Wood was born on August 29, 1927 in Omaha, Nebraska to Jessen and Ann (Weiland) Wood. She died peacefully in her home on July 22, 2016 near Long Pine, Nebraska at the age of 88 years. Betty graduated from Omaha North High School and worked at Northern Natural Gas when she married Gerald E. Aronson on October 4, 1948. They started their married life in Omaha then headed to Gretna, Nebraska to pursue farming while raising their three children. The great outdoors brought her many hours of enjoyment. Her love for ice skating was started in her youth at AK-SAR-BEN in Omaha. That is where she met Jerry and fell in love. Betty and Jerry retired to Long Pine where she took up cross-country skiing in her 60's. She enjoyed tennis lessons when the Long Pine tennis court opened. Betty loved football season and was a loyal Husker fan. She was an avid reader, gardener and always enjoyed hosting her Sunday get-togethers, catching up with neighbors and friends. Living in Long Pine was Betty and Jerry's dream come true. Building a life together among the pines and wildlife gave their last years on earth true peace. Betty was preceded in death by her husband Gerald "Jerry" E. Aronson. She is survived by her aunt, Margaret Weiland of Omaha, Nebraska and a sister, Jean Marie Peterson of Lake Havasu, Arizona; along with her three children, son, John G. (Jeanie) Aronson of Fort Collins, Colorado and daughters, Jane Aronson and Joan Aronson of Dallas, Texas; three grandchildren, Chris (Sharla) Aronson, Alexandra (Jason) Aronson-Phillips and Nikki (Jeremy) Baulisch-Rasmussen and a great-granddaughter, Leighton Aronson; and also several nieces and nephews. Graveside Services were held on Thursday, July 28, 2016 at the Grandview Cemetery at Long Pine. Tributes and poems were read by Chris Aronson and Nikki Rasmussen. Pallbearers were, Joyce Hutcheson, Charles Messbarger, Robert Messbarger, Clint Jones, Dave Zacharias, and Gerald Van Every. Memorials were suggested to the family in her name for future designation. Hoch Funeral Home of Ainsworth was in charge of the arrangements.

Betty Ann Camilla Wood was born on August 29, 1927 in Omaha, Nebraska to Jessen and Ann (Weiland) Wood. She died peacefully in her home on July 22, 2016 near Long Pine, Nebraska at the age of 88 years. Betty graduated from Omaha North High... View Obituary & Service Information

The family of Betty Ann Camilla (Wood) Aronson created this Life Tributes page to make it easy to share your memories.