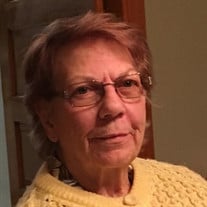 Bessie Irene (Forgey) McCoy was born at the Brown County Hospital in the early summer of 1942, on June 27, to parents, Glenn G. and Lona M. (Massey) Forgey. She completed the family of five, joining older brothers Wayne and Lyle Forgey. Having two older brothers made Bessie tough. This strength would later support Bessie through her fight with long term illness. Her courageous fight against leukemia ended peacefully as Bessie passed away on June 15, 2018 at the Brown County Hospital in Ainsworth, Nebraska. The majority of Bessie's younger life was spent residing in Keya Paha County, Nebraska. As a young girl, Bessie attended elementary school at District 56 and Keya Paha County High School, in Springview, Nebraska. A short time after graduating high school in 1960, Bessie would marry her high school sweetheart. To this union, two boys were born; Terry Wayne Worth and Rodney Duane Worth. Bessie would work for several years teaching in rural Brown County and Keya Paha County schools. During this time, she would also attend summer school through Chadron State College for seven years. After attaining a Bachelor of Science Degree, Bessie would move to Grand Island, Nebraska to teach in their public school system for the remainder of her teaching career. During that time she received her Master of Science Degree in Education from, (at that time,) Kearney State College. During Bessie's life, she enjoyed listening to music, dancing, being outdoors in nature, and playing cards with friends and family. Bessie would greet friends, family and visitors with a gentle and warming smile. Her kindness was an expression of her caring demeanor. She was a member of the Springview United Methodist Church, and past member of the Nebraska University Women and the Nebraska State Education Association. Preceding Bessie in death are her parents, older brother, Wayne Forgey and sister-in-law, Elaine (Lyle) Forgey. Surviving relatives are her two sons, Terry Worth of Sunrise Beach, Missouri, and Rodney (Melissa) Worth of Shawnee, Kansas, grandson Thomas Wayne (Crystal) Patzel of Alvo, Nebraska, great-grandchildren, Kaydance, and TJ (Thomas Jr.), step-great-grandchild Keara; brother, Lyle Forgey, sister-in-law, Marvel( Wayne) Forgey, and many other nieces, nephews, and cousins. Memorial services were held at the United Methodist Church in Springview, Nebraska with Pastor Michelle Byerly officiating the service. Music was provided by Rick Nelson and Scotty Nelson with special selections of “An Evening Prayer” and “What A Friend We Have In Jesus.” Congregational Selections were, “When We All Get to Heaven,” “Standing On The Promises,” and “Jesus Loves Me.” Honorary Bearers were, Dean and Debbie Forgey, Teresa and Dale Luse, Deb and Doug Douglas, Dan Forgey, Fred Egelhoff, Don Monroe, Joe Hutchinson, Ron Worth, Lorraine Worth, Sara and Terry Bean, Carmen and Tony Larson, and Nadine and Erik Lance. Inurnment followed at the Mt. Hope Cemetery in Springview under the direction of Hoch Funeral Home of Ainsworth.

Bessie Irene (Forgey) McCoy was born at the Brown County Hospital in the early summer of 1942, on June 27, to parents, Glenn G. and Lona M. (Massey) Forgey. She completed the family of five, joining older brothers Wayne and Lyle Forgey. Having... View Obituary & Service Information

The family of Ms Bessie I. McCoy created this Life Tributes page to make it easy to share your memories.