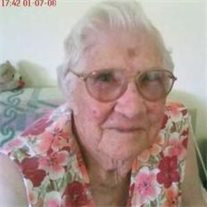 Bessie Louise (Fletcher) Poore was born March 3, 1920 at her grandfather's home near Rockville, Nebraska She passed away Sunday January 5th, 2014 at her home in Ainsworth, Nebraska. Bessie was the second child of four born to James and Lena (Heil) Fletcher. Most of Bessie's life was spent in south Brown County, Nebraska. There she received her education in rural schools. She graduated from Ainsworth High School in 1938, then pursued college at Chadron, Nebraska. Bessie enjoyed teaching in rural schools for many years afterward. November 15, 1941 she was united in marriage to Lawrence "Link" Poore of south Brown County. To this union a daughter Cheryl (Poore) Hodge was born. Together Bessie and Link enjoyed ranching and working together on their ranch for 56 years. After the passing of Link and her grandson Glen Hodge in 1997, she moved to Ainsworth to better care for herself. Bessie loved living in the country, loved the ranch. She enjoyed growing a large garden, and a large variety of flowers all around her home. She was always happy to lend an extra hand when needed, whether it was helping someone in their garden, hayfield, or even teaching neighbor kids how to catch and clean fish. Much of Bessie's time was spent together with family and friends fishing, (it didn't matter if it was in the heat of summer or in the middle of a cold winter.) It was the same with playing horseshoes. She was proud of the many trophies that she had won through the years, some from local tournaments, some from State level, as well as one from the World level held in Statesville, North Carolina. Her family, grandchildren, and great grandchildren were her greatest joys. She always had time for them, whether it was in a game of learning or stirring up a batch of her famous cookies. She loved teaching the values of respect. Her hands were always busy mending clothes, crocheting, and canning vegetables from her garden. After moving to Ainsworth she learned to quilt, loving it so much, she quilted with two different groups of ladies each week. She also served on rural school boards for many years, enjoyed being an active member of the Helping Hands Ladies' Club in south Brown County, along with being in the Retired Teachers' Association. Bessie is preceded in death by her parents, brother Jim Jr. Fletcher, husband Link Poore, daughter Cheryl Hodge, and grandson Glen Hodge. Survivors include son-in-law, Ellis "Al" Hodge of Ainsworth, grandchildren, Malinda Hodge and fiancé Tim Roggasch of Rose, Nebraska, and Eugene and wife Jennifer Hodge of Johnstown, Nebraska. Great grandchildren include, Brandie and Savanah of Rose, and Torrance, Lura and Robert of Johnstown. Two brothers, John and wife Melva Fletcher of Bassett, Nebraska, and Donald and wife Geri Fletcher of Gibbon, Nebraska. Nieces, nephews, and a host of other relatives and friends. Funeral services were held on January 11, 2014 at Hoch Funeral Home in Ainsworth, Nebraska with Dan Woods officiating the service. CD selections of "Amazing Grace" and "On The Wings of a Dove" were provided. Special remarks were given by Malinda Hodge. Pallbearers were, Eugene Hodge, Tim Roggasch, Ben Rhoads, Henry Fletcher and Monte Fletcher and Ken Smith. Burial was held at the Ainsworth Cemetery in Ainsworth, Nebraska. Memorials were directed to the family in her name for future designation.

Bessie Louise (Fletcher) Poore was born March 3, 1920 at her grandfather's home near Rockville, Nebraska She passed away Sunday January 5th, 2014 at her home in Ainsworth, Nebraska. Bessie was the second child of four born to James and Lena... View Obituary & Service Information

The family of Mrs. Bessie L. (Fletcher) Poore created this Life Tributes page to make it easy to share your memories.