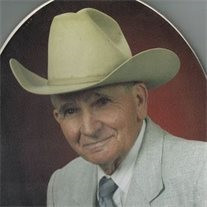 Bert James Nolles was born December 23, 1922, south of Newport, to Joe and Cleta (Bogue) Nolles. Bert was called home on December 5, 2013 after a short stay in the Rock County Hospital. He was baptized into the Catholic faith. He was the middle son of three boys. Bert attended grade school in a one room school south of Newport, and graduated from Rock County High School in 1941. Growing up, Bert loved the outdoors. This included cattle, horses and shooting sports. Bert became an expert at shooting 'birds' sitting on Linke Lake. He would tell that he helped to feed his family. This 'practice' became critical for his time spent in the Army later. Upon graduating from high school, Bert went to Wyoming to learn to be a 'real' cowboy. He worked on a ranch owned by BB Brooks, Governor of Wyoming. He enjoyed his time there as he got to ride and break horses, work with cattle and rope! (He even tried to rope a mountain lion). He was in cow camp when a government fur trapper came by and asked if he had heard of Pearl Harbor. Bert had not, but soon enlisted in the Army on December 18, 1943 at the age of 19. He served in the Army in World War II for two years. His practice shooting on Linke Lake proved useful as he was an infantry man and sharp shooter. Bert liked to joke about his time during World War II as his back-pack trip across France and Italy. He was honorably discharged on February 2, 1946. During those years in the service, he had become friends with Henry Bernier who was a medic in Bert's unit from Fall River, MA. Henry came from a large family that was very close. His sister wrote to him often and sent pictures, and Henry would show them to the rest of the guys in his unit. Bert asked if he could write to the sister, Irene, and was given permission. After his discharge, Bert returned home to the family ranch for a very short time, and then moved to Fall River for a year where he married Irene Bernier in the Notre Dame Cathedral. They moved to New Mexico where Bert's parents lived. During that time, Bert's grandparents, Bert and Nellie Bogue, asked him to return to Rock County and ranch. Bert and Irene moved back to the family ranch south of Newport. They later purchased part of the ranch from his grandparents where they raised their three children, Patricia, Debra and Michael. Bert was a talented horseman. He served as the horse 4-H leader for many years. Cattle were also another love of Bert's. He exhibited Hereford cattle across the United States and took pride in selling top quality cattle. He took pride in selling bulls to national ABC news anchorman, Chet Huntley. Bert was proud of his family as they all took after him in one way or another. Bert always had a smile on his face when he was spending time with his family or working on the ranch. He will always be remembered for his great love of his family, his work with Hereford cattle, horses, and always standing up for his beliefs. Bert missed his wife Irene greatly when she passed, and his family is comforted knowing they are reunited. Bert is preceded in death by his beloved wife, Irene (Bernier) Nolles, grandson, Trent Larson, parents, Joe and Cleta Nolles, brothers and sisters-in-law LaVerne and Fern Nolles, Gene and Connie Nolles. Survivors include, Daughters, Patricia Larson-Kearney, Debra Nolles and son, Mike (Trudy) Nolles of Bassett. Grandchildren, Amber and Jason Fixemer, Matt and Brandi Larson all of Kearney, and Katie Nolles of Bassett. Great-Grandchildren, Beckett and Sloane Fixemer and Keller Larson. Nieces, Niki and Charmie and life time best friend, Richard Lackaff and long-time friends Clyde Blake, Ray Herrington, Joe Andrews, Edith Keller and Keith Wright, and many cousins. Visitations with a Rosary/Prayer service were held on Sunday, December 8th at the Holy Cross Catholic Church in Bassett. Funeral services were then held on Monday, December 9th at 10:30 AM at the Holy Cross Catholic Church with Father Jim Heithoff serving as Celebrant. Music was provided by Helen Stec and Trudy Nolles. Song selections were, "Amazing Grace" and "The Old Rugged Cross." Pallbearers were, Rich Lackaff DVM, Jay Stewart, Kent Smith, Keith Wright, and Richard Keller. Honorary bearers were, Dave Dorsey, Keith Ammon, Dennis Swanson, Bruce Boettcher, Jim Frizzell, Ken Smith, Jim Sybrant, Jim Harms, Mark Jilg, Tony Fox, and Scott Robinson. Burial was held at the Bassett Memorial Park Cemetery with Military Honors being presented by the Bassett American Legion Post #123. Hoch Funeral Home of Bassett was in charge of the arrangements.

Bert James Nolles was born December 23, 1922, south of Newport, to Joe and Cleta (Bogue) Nolles. Bert was called home on December 5, 2013 after a short stay in the Rock County Hospital. He was baptized into the Catholic faith. He was the middle... View Obituary & Service Information

The family of Mr. Bert J. Nolles created this Life Tributes page to make it easy to share your memories.