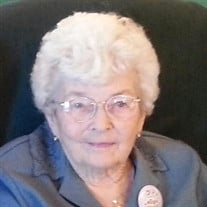 Bernice Marjorie (Seier) Kuchera was born September 29, 1923 at Long Pine, Nebraska to Henry and Bessie (Farris) Seier. Her sister, Garneta joined the family two years later. She attended Kindergarten in Long Pine, staying with her Seier grandparents, and completed the rest of her elementary schooling at the Duff School. She graduated from Rock County High School at Bassett, Nebraska in 1941. After attending Chadron State College at Chadron, Nebraska for one semester, she began teaching elementary school in the fall of 1942 in Rock County. It was on a trip home from Chadron that Bernice met her future husband, Edward Kuchera. Ed was getting on the train at his home town of Rushville, Nebraska to enter into the service at Fort Leonard Wood, Missouri. They struck up a conversation and he asked if she would write to him; thus their courtship began. They were married at Waynesville, Missouri on May 13, 1943 and continued to live in Missouri until Ed's discharge from the Army in 1944. After returning to Nebraska, they moved to Gering, Nebraska and in 1945 moved to her parent's ranch south of Long Pine. Their oldest son, Michael Henry, was born April 17, 1948. They moved to Rushville for a year and then purchased a place south of Bassett, Nebraska in 1950 and their second son, Terry Lee, was born February 28, 1951. Bernice resumed teaching in 1952. Ed and Bernice bought the Trading Post at Rose, Nebraska in 1965. Ed ran the store and was Post Master and Bernice continued her teaching career. They sold the Trading Post in 1981 and purchased their home in Long Pine. Bernice taught continuously, except for one year, until 1985, with 27 of these teaching years being in Rock County, and achieved by continuing her education during the summer months. Bernice accomplished her goal of teaching and received her Bachelor's Degree in Education from Kearney State College at Kearney, Nebraska in 1982. Even though she had been teaching for nearly 30 years, she still had to do her student teaching in the fall of 1981. Bernice continued teaching in the Long Pine School until she retired in 1985, after 33 years of teaching, although for several years she was still called on to substitute in schools. After her retirement, Bernice became an avid quilter, completing many quilts and wall hangings for her children, grandchildren and many of her great- grandchildren. She was a member of the Sandhills Quilt Guild and several teacher organizations. She was also actively involved with the Long Pine Legion Auxiliary, holding numerous local and state offices. During this time, she also learned to play Bridge and played for many years with friends and in a Bridge Club. She was baptized and joined the St. Peter Lutheran Church in 2008. Ed, her husband of 63 years passed away in 2006 and Bernice continued to live in her home in Long Pine. Bernice had many health issues throughout her life which resulted in four open heart surgeries, stents and another heart procedure for blockage. She always bounced back and continued teaching and doing the things she enjoyed. In June of 2013, Bernice moved into Cottonwood Villa Assisted Living at Ainsworth, Nebraska and it became her home for over five and one half years. Her pride and joy was her family. She always enjoyed hearing details of the boy's lives and what was new on the ranch or farm. She attended many sporting events, concerts and other activities that the grandchildren and great-grandchildren were in and enjoyed hearing all the news from each family. During her time at Cottonwood, she devoted a lot of time to compiling a book of her memories, which was printed in 2015. The preface to her book reads; "Sometimes when you sit down to write 92 years of memories, it's a bit like making a Patch Work Quilt. Your mind draws out different shapes, color, and pieces that can only be "sewn together" as they come out of the brown bag (or gray matter or your mind) and be told as they surface." Her book is filled with many memories of her life and is a treasure that she shared with her family. With her health declining, she moved from Cottonwood to Rock County Long Term Care at Bassett, on February 8, 2019 and passed away on February 9, 2019. Bernice was preceded in death by her parents; husband, Edward and nephew, Ken Johnson. She is survived by sons, Mike (Janet) Kuchera of Rose and Terry (Jeri) Kuchera of Bassett; seven grandchildren, Peggy (Paul) Coleman of Grants Pass, Oregon, Clay (Hilary) Kuchera of Rose, Frank (Amy) Kuchera of Kearney, Jodi Foxworthy of Wahoo, Nebraska, Scott Kuchera of Valentine, Nebraska, Kelli (Jeremy) Kral of Ainsworth, and Kent (Tina) Kuchera of Bassett. Sixteen great-grandchildren; Garrett and Madeline Anderson, Sarah Van Linda of Grants Pass, Oregon; Jud, Josie, and Tate Kuchera of Rose; Darby, Audrey and Henry Kuchera of Kearney; Derek Bell, Maya and Maci Foxworthy of Wahoo; Erin Painter of Ainsworth; Kade and Karli Kral of Ainsworth and Audrey Kuchera of Bassett. Sister, Garneta Johnson of Bassett, along with nieces, nephews and other family and a host of friends and former students. Funeral services were held on February 13, 2019 at the St. Peter Lutheran Church in Bassett, Nebraska, with Vicar Nancy Moore officiating the service. Music was provided by Evelyn Armstrong. Special selections of “Just A Closer Walk with Thee” and “The Love of God” and “How Great Thou Art” by the Horner Sisters, with the congregational selection being “Borning Cry.” The obit was shared by Jodi Foxworthy and a poem was read by Michelle Bain. Pallbearers were, Clay Kuchera, Scott Kuchera, Frank Kuchera, Kent Kuchera, Judson Kuchera, Derek Bell and Kade Kral. Honorary bearers were, all of Bernice’s other Grandchildren, Great-Grandchildren, and family members and friends. Burial followed at the Bassett Memorial Park Cemetery in Bassett. Hoch Funeral Home in Bassett was in charge of the service. In lieu of flowers, memorials are suggested to the Long Pine American Legion Auxiliary or to the Donor’s Choice.

The family of Mrs. Bernice M. (Seier) Kuchera created this Life Tributes page to make it easy to share your memories.