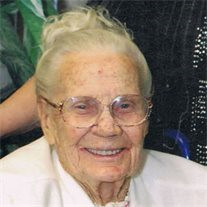 Bernice Lucille Kurzenberger was born April 7, 1922 to William and Cora Ann Pettit Kurzenberger of Springview, Nebraska. She was the tenth of twelve children and grew up on the homestead ten miles north of Springview. A school teacher nicknamed her "Toots" and she has been known by that ever since. When she was seven years old her mother died leaving seven sons and four daughters, ranging in age from six months to twenty years. The day of the funeral a very dear neighbor lady told her she was a good person and would make a good mother as she had a heart of gold, and Toots never forgot that. Following her mother's death the family stayed together except the baby went to live with an aunt. The family attended church in a school house near Burton, Nebraska and she was baptized in 1933 in the German Lutheran Church of Burton. "Toots" attended county school District 27. The family went to school with a team and buggy and in later years she and two brothers walked the three miles to school. She graduated from Keya Paha County High School in 1939. Her classmates said she enjoyed good humor spiced with giggles. She taught at the rural schools in Keya Paha County and then at the Rock County Hospital as a nurse's aide, which she enjoyed very much. On March 10, 1949, she married the love of her life Fred "Ted" Seberger in the Bassett Methodist Church. They went to live at the ranch ten miles south of Newport, Nebraska. Three beautiful children, Lee Ann, Sue Lyn, and Frank Allan blessed their lives. She always helped with the ranch work when needed, raised a large flock of chickens, raised a garden, and the hired help were treated like their own. She was a life member of the American Legion Auxiliary and was a faithful blood donor giving several gallons of blood. In her later years she enjoyed volunteering at the Bassett Hospital Auxiliary Thrift Store. "Toots" enjoyed life, being busy outside and she also enjoyed dancing and cooking. "Toots" was always very thoughtful, willing to help and took great interest in her family, grandchildren and great-grandchildren and tried to live up to whatever she undertook to do. She was devastated by the death of her husband Fred, "Ted" on February 10, 1997. She remained on the ranch until October, 2008, when she found the perfect house in Bassett and moved in. In March 2011, her daughter Lee Ann moved back to Bassett to live with her and take care of her. Here "Toots" remained living in her own home until her death on April 6, 2014, just one day short of her 92nd birthday. "Toots" was preceded in death by her husband Fred; her parents; brothers, Kermit, George, Gerald, Norval, Grayton, Clayton and Rolland; sisters, Mary Alice Miller, Marge Spann and infant sibling. She is survived by her daughters, Lee Ann Chinn of Bassett, Sue Brott and husband Rex of Stapleton, Nebraska, son, Frank and wife Pam of Newport, Nebraska; grandchildren, Keeley Lammers (Adam) of Gretna, Nebraska, Kevin Keim (Brooke) of Chadron, Nebraska, Bobbie Anthony (Ben) and Lee Seberger (Debbie) all of Bassett; nine great-grandchildren, Payton and Parker Lammers, Cameron, Kade and Kody Keim, Kyra and Trey Anthony, and Noah and Isabelle Seberger; one sister Maxine Jamison of Springview; sister-in-law, Marie Spoering and husband LeRoy of Bison, South Dakota; along with many nieces and nephews and many friends. Funeral services were held on April 10, 2014 at the St. Peter Lutheran Church in Bassett, Nebraska. Officiating the service was Pastor John Brink and Pastor Gary Graesser. Special music was offered by Evelyn Armstrong and Stanley Larson with special song selections of "Beyond The Sunset" and "Old Rugged Cross". Pallbearers were, Adam and Keeley Lammers, Kevin and Brooke Keim, Lee and Debbie Seberger, Bobbie and Ben Anthony. Honorary bearers were all of Bernice's other family and friends. Burial was held at the Bassett Memorial Park Cemetery under the direction of Hoch Funeral Home of Bassett. Memorials were directed to the Bassett American Legion Auxiliary or to the Rock County Hospital Auxiliary.

Bernice Lucille Kurzenberger was born April 7, 1922 to William and Cora Ann Pettit Kurzenberger of Springview, Nebraska. She was the tenth of twelve children and grew up on the homestead ten miles north of Springview. A school teacher nicknamed... View Obituary & Service Information

The family of Bernice L. "Toots" (Kurzenberger) Seberger created this Life Tributes page to make it easy to share your memories.