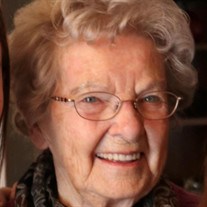 Bernice Rebecca Frauen Eichenberger was born in 1921 in Ainsworth, Nebraska. She passed away in Kearney, Nebraska at the Mount Carmel Home on November 3, 2020 at the age of 99. She was preceded in death by her husband Paul; her two sisters; son, Max and infant granddaughter Rebecca Eichenberger. Bernice was the third daughter of Max and Verna (Woolf) Frauen, named after her grandmother Rebecca Frauen. Her sisters were Marjorie Bammerlin (Jerry) and Phyliss Sisk (Charles). She went to grade school in a country school in Keya Paha County. When her sisters started to high school in Springview, Nebraska she finished grade school in town. She graduated from Keya Paha County High School in 1938. Bernice married Paul Morris Eichenberger in June of 1939, at the Frauen Ranch. They moved to a ranch 3 miles south of Springview and lived there for 58 years. To this union were born Max Bradley, Virginia Schoettger (Garth), Paula Utsey (Howard) and Ted (Doris Patterson). Bernice, as a child, wanted to be a nurse. She was a nurse to Max who was born with cerebral palsy. She took his handicap without any complaints and gave him unconditional love and care until his death at the age of 29. Bernice always said he was such a blessing to her and Paul plus to his sisters/brother, extended family and his friends. Bernice became a Christian in her late 20’s and joined the Seventh Day Adventist Church. Her faith was strong and her children felt so blessed to have a mother who daily read the Bible and would find her kneeling for prayers by her bed. Surely this is how she coped with the constant physical and mental care of Max. Bernice and Paul lived on their ranch until Paul’s health became too difficult to continue ranch work. They moved to Springview in 1995, enjoying a new home. Bernice loved decorating her home at the ranch and in town. She had an exceptional ability to make both family homes beautiful due to her good taste. Paul always said that he had to be careful at night for he never knew where she had moved the furniture. Her flower gardens were a source of much happiness and she loved to fill the house with vases of flowers. After Paul passed in 2003, Bernice enjoyed Bible studies with local ladies. She continued to embroider quilts for her grandchildren. Bernice loved being a grandmother and enjoyed playing board games, walking, listening, understanding each of their unique personalities and encouraged their spiritual life. Her grandchildren will always remember her cooking/baking abilities, including her cinnamon rolls and “buns”. Bernice will be so missed by her living three children, 7 grandchildren; Chad Schoettger, Suzanne Schoettger, Julie Masek, Todd Eichenberger, AnneMarie Svoboda, Paul Eichenberger and Brian Utsey; 13 great-grandchildren; 3 great-great-grandchildren; and Zola Randall, her sister-in-law. She treasured her nephews; Jerry Sisk, Clifford Sisk, Greg Bammerlin, Dennis Bammerlin, Michael Randall and Dick Randall. She would have wanted her family to know that she was ready to go to sleep and is at peace waiting for her Lord and Savior and would encourage each of them to look forward to the Second Coming of Christ to be reunited. On November 16, 2020, Bernice was laid to rest at the Mt. Hope Cemetery in Springview after a private family ceremony honoring her life. Her grandchildren listed by age were her Honorary Urn Bearers; Chad Schoettger, Suzanne Schoettger, Todd Eichenberger, Julie Schoettger (Masek), AnneMarie Eichenberger (Svoboda), Brian Utsey and Paul Eichenberger. Hoch Funeral Home of Ainsworth assisted with the arrangements.

Bernice Rebecca Frauen Eichenberger was born in 1921 in Ainsworth, Nebraska. She passed away in Kearney, Nebraska at the Mount Carmel Home on November 3, 2020 at the age of 99. She was preceded in death by her husband Paul; her two sisters;... View Obituary & Service Information

The family of Bernice R. (Frauen) Eichenberger created this Life Tributes page to make it easy to share your memories.

Bernice Rebecca Frauen Eichenberger was born in 1921 in Ainsworth,...