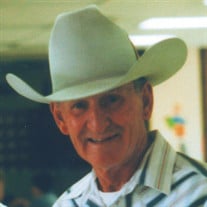 Ben Burdick was born in a sod house on October 21, 1926 in the Purdum, Nebraska area. He was one of seven children born to Raymond and Vera (Athey) Burdick. Ben’s family worked hard and had little to show for it, as with many other people in that time. Ben lived through the Great Depression. His childhood involved walking or riding a horse five miles to school every day, where he learned the essential subjects of arithmetic, writing and reading. Following school, it was home to do the daily chores and help on the ranch. Raised as a ranch boy, he was destined to remain, but with the calling of World War II, Ben found himself overseas defending our country. He served in the U.S. Army Infantry Division and the Engineers Construction Battalion as a corporal in the South Pacific until his honorable discharge in November 1946, when he returned to this area to settle and make a permanent life. Ben lived on Goose Creek where he survived the Blizzard of 1949, with so much snow he climbed out of his bedroom window upstairs to be able to tend to his livestock that winter. In 1950, Ben met the love of his life, Alita Mae Koch and they joined as husband and wife in October of 1951. To them, four children were born, Terry, Rox Ann, Cindy and Benny. As Ben and Alita raised their children, Ben made his life as a cowboy and rancher in Brown and Cherry Counties, running a cow/calf operation. The cowboy way was definitely Ben’s way. He rounded up and drove cattle to Dunning, Nebraska to load on the train and drove cattle over 70 miles from the Elsmere and Purdum areas to Bassett for sale. One of his favorite past times was horses. He regularly broke horses for himself, others, and his children to ride. Ben was one of the few cowboys left who knew how to break and drive teams of horses in the annual chariot races held at the Brown County Fair. Ben was able to experience first-hand the thrillin’ ride of haulin’ back and grabbing the reins of horses driven hard. Ben passed his love of horses onto his children and grandchildren, who he taught to rope and ride. Ben, Alita and their children eventually settled on a homestead in Johnstown, where he resided until his passing. At the age of 94, Ben still loved country music, country dancing, riding his horse and his cows. He continued to make his way to the hayfield every summer until just two years ago and ran a successful Black Angus cow/calf operation with his son, Terry and grandson, Byron. Ben opened chutes at the National Rodeo Finals in Fargo, North Dakota, and judged numerous rodeo competitions throughout the state of Nebraska. He served as the Johnstown Volunteer Fire Department Fire Chief for 39 years, was a Brown County Fair Board Director, a former member of the Elks, was a member of the American Legion Post #79 in Ainsworth, was an honorary chapter farmer in FFA, and was inducted into the Sandhills Cowboy Hall of Fame in 2013. He is preceded in death by his parents, Raymond and Vera Burdick, all six of his siblings and daughter, Cindy Zurcher. His survivors include his wife, Alita Burdick; children, Terry Burdick of Wood Lake; Roxi Ohlmann and husband, Monte, of Valentine; Benny Burdick and wife, Jami, of Johnstown; honorary son Rick Goochey and wife, Connie, of Ainsworth; 10 grandchildren; 26 great grandchildren; and 1 great-great grandchild. What a cowboy. What a life. Funeral Services were held on Saturday, September 11, 2021 at the Ainsworth United Methodist Church with Pastor Martin Leeper officiating. The obituary was read by granddaughter, Loralea Frank. Reflections were given by Dean Cole. A special tribute was expressed by Byron Burdick. A poem was presented by Kale Burdick. Prelude music was provided by Linn Baxter. A congregational hymn, “How Great Thou Art,” was sung. The vocal selection, “A Picture In A Frame,” was played by Dan Carson. The Long Ride” was played by Mike Baxter. The CD Selections played were, “I’ve Been A Cowboy” and “Coyote Hunt.” Interment followed in Ainsworth Cemetery. Casket Bearers were: Brad Ohlmann, Tim Ohlmann, Loralea Frank, Brittany Ohlmann, Tina Anderson, Byron Burdick, Ben Zurcher, Kale Burdick, Troy Zurcher and Trey Burdick. Honorary Casket Bearers were the members of the Wood Lake Coffee Club and the Johnstown Fire Department. Military Honors were presented by the Ainsworth American Legion Post #79. The Ringing of the Bell Ceremony was conducted by the Johnstown and Wood Lake Fire Departments. Memorials were suggested to the family in Ben’s name for future designation. Hoch Funeral Home of Ainsworth was entrusted with the service arrangements. Online condolences may be left for the family at www.hochfuneralhome.com.

Ben Burdick was born in a sod house on October 21, 1926 in the Purdum, Nebraska area. He was one of seven children born to Raymond and Vera (Athey) Burdick. Ben&#8217;s family worked hard and had little to show for it, as with many other people... View Obituary & Service Information

The family of Mr. Ben R. Burdick created this Life Tributes page to make it easy to share your memories.