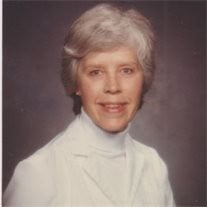 Barbara Janet Lamb was the first born of Morris and Marie Skinner on August 17, 1931 in Ainsworth, NE. She spent her childhood growing up in the Sandhills prairie with her parents and her brother. Her family was in Nebraska in the summers, as her father was collecting fossils for the Frick Collection at the Museum of Natural History in New York City. In the winter her family moved to New York City, so her father could prepare and catalog those fossils. When she was younger, she spent the winters in New York City with her parents, and she came back to Ainsworth in the summer. However, when she began high school, she and her brother, "Fritz", would room and board with local Ainsworth families when her parents had to return to New York City to work. Barbara graduated in 1949 from Ainsworth High School. She moved to Lincoln, NE, and she attended the University of Nebraska-Lincoln where she met her future husband, Alan Lamb. Barbara and Alan married and moved to Oklahoma City, Oklahoma. Out of this union they had five children: Marcia, Theresa, 2 infant sons who died at birth, and Thomas. They divorced while the children were still young. Being a single mom, she had to work, go to school, and take care of 3 young children. She obtained a degree as a Respiratory Care Therapist. As a respiratory therapist, she worked at Baptist Memorial Hospital and the VA Hospital in Oklahoma City. During this time Barbara always enjoyed celebrations, so she would have office parties at her home with her signature finger foods and dance parties in the garage! In 1974, Theresa Lamb passed from a rare disease, Lupus. This life moment absolutely crushed Barbara. Her son Thomas decided he wanted to move to Ainsworth, NE, in the summer of 1975. He did, and Barbara decided to move back to her home town of Ainsworth to be with her son and take care of her aging parents. She always wanted a log home, so she researched and traveled to Montana and found a company that would supply her home. It was finished in the summer of 1977, and she was delighted! Moving to Ainsworth caused a big change in her professional career. She established the first respiratory therapy department at the Brown County hospital. She also established therapy centers at Winner, South Dakota and Valentine, Nebraska. She performed therapy consulting services in O'Neill, Nebraska and throughout the general western Nebraska and South Dakota area. Barbara worked very long hours and helped large numbers of people with respiratory problems. Before retiring, Barbara set up the first satellite office and service for Home Health Medical Equipment out of Norfolk in Ainsworth. She retired from the Hospital in 1993, but continued to work at Home Health delivering respiratory services throughout the area. Barbara was featured in an article in the Omaha World Herald about her work throughout the region as a respiratory therapist. The article included a beautiful picture of her in front of her log home in the summer. From that point on, folks gave her the name of "Sandhills Barb". She loved Ainsworth and the Sandhills so much that she became very active in the Community. She served on the board of Ainsworth Community Schools, the Board of Directors of Brown County Hospital, the board of directors for the planning commission of Ainsworth, She served as a trustee for the Nature Conservancy and she was instrumental in the creation of the Sandhills Discovery Conference which provides education about the Sandhills during annual conferences. When the new Brown County Hospital was built Barb even had some of her artistic flair put into the hospital. The round window that is to the west of the hump at the front of the hospital symbolizes the Sunset in the Sandhills. She loved all forms of art and was very good at painting, charcoal drawings, carving and poetry. That was her form of meditation. For those of you who new Barb you absolutely knew when you were in her presence that you were in her world because she was absolutely in the moment of your world. Here is a poem that was a favorite of Barbara's and in these few words show the struggles, and the joys of overcoming those struggles and living a full and an intentional love of life. From the book, Writings from Wild Soul, by Wendy Sarno This is the Bright home in which I live, this where I ask my friends to come, this is where I want to love all the things it has taken me so long to learn to love Barbara Lamb had a life well lived. She is survived by her son Thomas Lamb, her daughter Marcia Meade (Edward Dawson), her granddaughters Callie and Zoe Lamb, and her nephew Robert Skinner and wife (Meghan). She will be greatly missed by many friends and relatives, and grateful community members and patients. She was preceded in death by her parents, Morris and Marie Skinner, her brother, Dr. Morris F. Skinner, Jr., and her daughter, Theresa Lamb. A Celebration of Life Service is scheduled at her home in Ainsworth at 12:00 on July 1st 2018. In lieu of flowers, memorials are suggested to: Morris F. Skinner Scholarship Fund https://www.nebcommfound.org/give/brown-county-community-foundation-fund or to The Skinner Award Fund https://vertpaleo.org/SpecialPages/Donate.aspx

Barbara Janet Lamb was the first born of Morris and Marie Skinner on August 17, 1931 in Ainsworth, NE. She spent her childhood growing up in the Sandhills prairie with her parents and her brother. Her family was in Nebraska in the summers,... View Obituary & Service Information

The family of Ms Barbara J. (Skinner) Lamb created this Life Tributes page to make it easy to share your memories.

Barbara Janet Lamb was the first born of Morris and Marie Skinner...