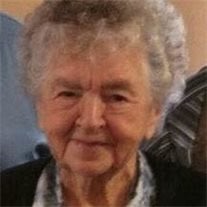 Barbara was born August 31, 1928 at home on her parents' ranch in Blaine County, near Dunning, Nebraska. She was the third of six children of Delbert and Mildred (Warren) Rice. While growing up, Barbara was active in 4-H with sewing, cooking, and showing beef cattle. Following her graduation from Dunning High School, Barbara attended College in Denver and attained a teaching degree. She taught at several schools, including Cottonwood. It was while she was teaching at Cottonwood that she met and married Parker Strand in 1948. They made their home on the Strand Ranch near Koshopah, Nebraska. They had six children, Rick, Roger, Bill, Barbee, Becky and Ron. In 1982, Parker and Barbara moved to Ainsworth while continuing to operate the ranch south of town. Barbara began to volunteer with the GED program in Brown County in between helping Parker with windmill repairs, bottle feeding orphan calves, and entertaining grandkids. Barbara was an active GED volunteer for over 25 years and received the Volunteer Citizen of the Year award for her work with GED. She had a reputation for being able to teach anyone as long as they would show up for class. Barbara enjoyed quilting and made quilts for all her grandkids and great-grandkids as well as for each one of her GED students who had babies. Barbara was also a master of crossword puzzles. Barbara was a person who worked big and lived small. In June of 2016, Barbara entered the Long Term Care Center in Bassett due to a stroke which made it difficult for her to care for herself. At the Long Term Care Center, she enjoyed activities such as bingo, music, and bible study. Barbara passed away November 2, 2016 at the Care Center, surrounded by family and friends. She is survived by sons, Rick (Linda) of Ainsworth, Roger (Judy) of Lincoln, Bill and Ron of Ainsworth, daughter Barbee (Jack) Robinson of Fairbury, Nebraska. Twenty-one grandchildren, fifty-two great-grandchildren, and seven great-great-grandchildren. She is also survived by her sisters, Dolores Mandeville of Imperial, Nebraska, RuthAnn Rice of Omaha, Nebraska, and Pat Stithem of Clinton, Arkansas; sister-in-law, Lauretta Rice of Alda, Nebraska; as well as numerous nieces, nephews, and cousins. She was preceded in death by her parents, Delbert and Mildred Rice, brothers, Don Rice and Allen Rice, husband Parker, daughter Becky Koubek, three grandsons, Rickie Strand, Josh Walker, and Rusty Walker, a granddaughter, DeAnna Strand, and great-grandson, Coby Wolken. Memorial services were held on November 11, 2016 at Hoch Funeral Home in Ainsworth, Nebraska with Pastor Mick Thornton officiating the service. Music was provided by Dan Carson and Melanie Coffman. Special music selections of "Peace In The Valley" and "A Picture In A Frame" were provided. Inurnment followed at the Ainsworth Cemetery in Ainsworth. Memorials were suggested to the Ainsworth Public Library or to the Ainsworth Senior Center.

Barbara was born August 31, 1928 at home on her parents' ranch in Blaine County, near Dunning, Nebraska. She was the third of six children of Delbert and Mildred (Warren) Rice. While growing up, Barbara was active in 4-H with sewing, cooking,... View Obituary & Service Information

The family of Barbara J. (Rice) Strand created this Life Tributes page to make it easy to share your memories.