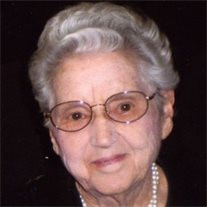 Teresa Belle (Downing) Wilkins, age 98, was born April 17, 1918, near Wood Lake, Nebraska. She was one of 12 children born to Halsey and Julia Downing. Most of her early life was spent near the banks of the Niobrara River north of Wood Lake. She attended the Rocky Ford School in Cherry County. If the weather cooperated, she and her siblings made the three mile trek on foot carrying their lunch in a syrup bucket. Sometimes they were fortunate enough to hitch a ride with a team and wagon. Attendance was "hit and miss" as wind and snow frequently whipped the prairie. She learned the perils and hardships of "pioneer" life early. Drought, grasshoppers, wind, storms, and fires often made life miserable. The dirty 30's, was a particularly difficult time for the family. She remembers her mother hanging wet cloth, (probably feed sacks) over the windows and doors to keep the blowing dirt out. At times, she remembered hearing the cries of her younger siblings because they were hungry. Everyone was relieved when the rains finally came and the crops could once again be grown. During her early teen years, she became a nanny/hired girl for a prominent ranch family. When that family decided to take a land grant claim in Wyoming, Teresa went along and had many new adventures. These years remained in her mind as some of her most cherished memories. In her early twenties, she returned to Valentine, Nebraska and worked at the Jordan Hotel. A new church had started in town and it was here she made her confession of faith and was introduced to the pastor's brother who would later become her husband. She married Duane Wilkins on August 1, 1941 and moved to the Burton area. There she worked along side her husband in the hayfields and with the cattle. Two children were born to this union: Chester Dale and Naomi Jean. In 1960 the family moved to a farm north of Ainsworth, Nebraska. They were excited to farm with irrigation which was coming to the area. Teresa began working at J.M. McDonalds and continued there for about six years. She retired to become a full time grandma. She enjoyed taking care of the grandchildren and shared her stories and knowledge of pioneer living with them. She became known as "Grandma Teresa" to a number of extended family and neighbor kids. In 1995, Duane and Teresa moved off the farm and into Ainsworth. Duane passed away in 2001. Teresa became involved in a neighborhood Bible study and dearly loved the Word and fellowship. Her friendship has continued with her loyal neighbor, Marilyn Philben, long after most of the other members have gone to their eternal rewards. She was able to live in her own home with the help of her family and many devoted and loving health care givers. She passed away in her home surrounded by those she loved on Thursday, December 15, 2016. Preceding her in death were her husband Duane, her parents, all her brothers and sisters, and grandchildren, Rhonda Denny and Bryent Wilkins. She leaves to cherish her memory her son, Chet Wilkins and wife Marjorie, daughter, Naomi Denny and husband Garry all of Ainsworth. In addition she has four grandchilden, their spouses and families. Teresa was the sole remaining branch on her family tree, but numerous nephews and nieces are scattered across the area. Also surviving her are sister-in-law, Irene Correll and husband Bernie and many Wilkins nephews, nieces and extended family. Funeral Services were held on Monday December 19, 2016 at Hoch Funeral Home in Ainsworth with Pastor Gary Graesser officiating the service. Music was provided by Dortha McGill. Special music selections of "Safe in the Arms of Jesus" and "The Last Mile of the Way" were provided by Stanley Larson. Pallbearers were, Brad Wilkins, Jake Wilkins, Sam Wilkins, Scott Erthum, Tim Denny and Brad Samway. The Eulogy was given by Brad Wilkins and Renee Stogner. Burial followed at the Ainsworth Cemetery in Ainsworth, Nebraska.

Teresa Belle (Downing) Wilkins, age 98, was born April 17, 1918, near Wood Lake, Nebraska. She was one of 12 children born to Halsey and Julia Downing. Most of her early life was spent near the banks of the Niobrara River north of Wood Lake.... View Obituary & Service Information

The family of Mrs. Teresa B. (Downing) Wilkins created this Life Tributes page to make it easy to share your memories.