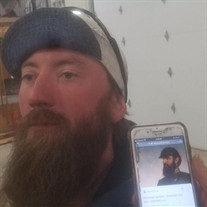 Austen Welke, age 28, was born on August 24, 1989 to Randy and Jeannie (Hanna) Welke, at the Arabia Ranch near Wood Lake, Nebraska. He was killed Sunday July 22, 2018, due to injuries sustained from a motorcycle accident near Redfield, Iowa. Austen's life began at the Arabia Ranch joining three older brothers. At the age of 18 months, he and his family moved to Johnstown, Nebraska. At the age of six, he became a big brother which he was very excited about. He attended school in Johnstown until the seventh grade and then started school in Ainsworth graduating in 2009. Austen loved wrestling and hanging out with his friends and family. Thanksgiving was his favorite holiday because family, friends, and anyone that wanted to come by, could just celebrate being together. Austen went to work for his oldest brother, Ryan, here in Brown County. He then went to college for a year in Colby, Kansas with his friend, Chase Hollenbeck. Later he went to work with his brother, Jared, in Gibbon, Nebraska. Austen started working at Willis Welding and SCG in Iowa, where he was living at the time of his death. He made friends wherever he was, and touched many people. He loved life, he made us laugh, with never a dull moment when he was around. He will be truly be missed by all! Austen was preceded in death by his grandfathers: George Hanna, Elmer Hanna, and Gene Welke. His grandmothers: Earline Hanna and Dorothy Welke. He is survived by his parents, Randy and Jeannie Welke of Johnstown, Nebraska; brothers, Ryan Welke and wife Angie of Long Pine, Nebraska, Jared Welke of Kenesaw, Nebraska, Reed Welke and wife Christina, of Seattle, Washington, and Landon Welke of Johnstown; nieces, Tamika, Ellie, and Kenley; his partner in life, Katie Marlow; and many aunts, uncles, cousins, and friends. Memorial services were held on July 28, 2018 at the Brown County Agriculture Society Hall in Johnstown, Nebraska with Pastor Bruce Beebout officiating the service. Music was provided by Scott Welke playing instrumental selections of “Blessed Assurance,” “His Eye Is On The Sparrow,” “Softly and Tenderly.” Honorary pallbearers were, Ryan Welke, Jared Welke, Reed Welke, Landon Welke, Chase Hollenbeck, Stetson Allen, Cameron “Dewey” Appleman, Garth Swett, JT Davis, and Matt Hollopeter, and all of his family and friends. Memorials were suggested to the family for a future designation. Hoch Funeral Home of Ainsworth was in charge of the arrangements.

Austen Welke, age 28, was born on August 24, 1989 to Randy and Jeannie (Hanna) Welke, at the Arabia Ranch near Wood Lake, Nebraska. He was killed Sunday July 22, 2018, due to injuries sustained from a motorcycle accident near Redfield, Iowa. Austen's... View Obituary & Service Information

The family of Mr. Austen J. Welke created this Life Tributes page to make it easy to share your memories.