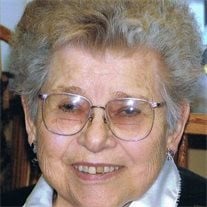 Aurelia Cora Krull was born to Henry and Susetta (Einspahr) Stichweh on November 19, 1923 in Collinsville, Illinois. She was the oldest of three girls. She passed away on May 1st, 2016 at the age of 92 years, and 6 months at the Burwell Community Memorial Health Center in Burwell, Nebraska. Aurelia grew up in Belleville, Illinois where she went to the Zion Lutheran Grade School where her father was a teacher. She went on to Belleville High School for two years. She worked as a waitress, and also went to California with a doctor's family to watch their children while they were there. During WWII, she and her family would invite service men that came to their church, home for a home cooked meal. In June of 1948, she accompanied her aunt and uncle to the dedication of the St. John's Lutheran Church in German Valley, north of Brewster, Nebraska. She came back in July to help Augusta Schneidereit with cooking for threshers. There she was courted by Ferdinand "Ferd" Schneidereit. They were married on November 25th, 1948. To this union six children were born. Ferd, who died in infancy, Susie, Ruth, Joyce, Mark, and Karen. Aurelia enjoyed being a wife and mother. Later on she became a cook, and also drove a school bus for the Brewster school. After 35 years of marriage to Ferd Schneidereit, who passed away on April 23rd, 1984, she moved to Ainsworth, Nebraska, where she cooked for several different cafés. She eventually met and then married Richard "Punk" Campbell on September 17th, 1988. They were married for three years. Richard passed away on May 27th, 1991. Aurelia liked to go on bus tours. When she went on a bus tour to Iowa for the Tulip Festival, she met Arnold Krull. Aurelia and Arnold were married on September 19th, 1992. They had 21 years of marriage before he passed away on June 30, 2013. Her last years were spent in the Ainsworth Care Center until it closed in 2015, then she was moved to the care center in Burwell. Aurelia is preceded in death by her parents; her three husbands; two brothers-in-law; an infant son, and an infant granddaughter. She is survived by her children, Susie (Roger) Almonrode of Friona, Texas; Ruth (Wendel) Downs of Mansfield, Missouri; Joyce Harp of Ainsworth, Nebraska; Mark Schneidereit of Booker, Texas; and Karen (Bob) Rooney of Brewster. 15 Grandchildren, 27 great-grandchildren, eight great-great-grandchildren, and one great-great-great-grandson. Two sisters, Lorraine Mommens of Omaha, Nebraska, and Arlene Maas of Williamsburg, Iowa. Three step-brothers, Donald Niemeier of Juniata, Nebraska, Richard Niemeier of Fairbury, Nebraska, and Gary Neimeier of DeWitt, Nebraska. Nieces, Nephews, and many other friends. Funeral services were held at the Zion Lutheran Church with Pastor Georg Williams officiating the service. Music was provided by Georgia Williams. Special selections were "What A Friend We Have In Jesus" and "I'm But A Stranger Here". Pallbearers were Nathan Rooney, Andrew Rooney, Alan Rooney, Max Fay, Kyle Watts, Ivan Schneidereit. Honorary bearers were all of Aurelia's family and friends. Burial followed at the German Valley Cemetery near Brewster, Nebraska under the direction of Hoch Funeral Home. In lieu of flowers, memorials were suggested to the family in her name for a future designation.

Aurelia Cora Krull was born to Henry and Susetta (Einspahr) Stichweh on November 19, 1923 in Collinsville, Illinois. She was the oldest of three girls. She passed away on May 1st, 2016 at the age of 92 years, and 6 months at the Burwell Community... View Obituary & Service Information

The family of Mrs. Aurelia C. (Stichweh) Krull created this Life Tributes page to make it easy to share your memories.