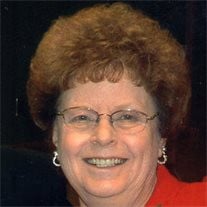 Audrey "Susie" Marie Allen, age 73, was born to Stella & Howard Smith, on December 24, 1939. She departed this life and entered into the gates of heaven on April 6, 2013, at the University Medical Center after a long battle with cancer. Susie attended Ainsworth elementary and high school. In May of 1997 Susie achieved a lifelong goal of receiving her high school diploma. She continued to pursue her passion for caring for others and received her Certified Nursing Assistant Certification, Certified Medication Aide Certification, and started working towards her Licensed Practical Nursing degree. In her younger years she enjoyed spending time with her friends and roller skating. It was at the roller skating rink where she met the love of her life, Gene. On July 17, 1957, they were united in marriage at the United Methodist Church in Ainsworth. Together they were blessed with four children: Lorne, Tammy, Roger, and Kristine (Kristy). Susie was a loving wife, mother, grandmother, and great-grandmother. She thoroughly enjoyed spending time with her family. One of her passions was spoiling her grandchildren and great-grandchildren. There were always time for visits with nieces and nephews and she was never too busy for coffee with friends. She took immense pleasure in helping others. Her dedication and work at Cottonwood Villa and the Ainsworth Care Center was an enjoyment in her life. She made wonderful friends with the residents and staff. Her loyalty and care to the residents was recognized when Susie received an award in Appreciation of Outstanding Service while working at Cottonwood Villa and the Gentle Touch Award while working at the Ainsworth Care Center. At the Ainsworth Care Center she worked at numerous positions. One of the greatest joys in her life was when she accepted the position as the Activities Director. Throughout her life she could make friends with anyone. During her treatment, she met and encouraged many new friends. Susie was also a member of The Red Hat Society and the Ainsworth Busy Club (ABC) Club. Most of all, her Christian faith was the center of her life. Even during her final illness, her faith only grew stronger. She was a special member of the Evangelical Free Church of Ainsworth and enjoyed attending various other churches, as she made friends with many ministers. She was preceded in death by her parents: Howard Smith and Stella Gelsinger; her Step-Father Dale Gelsinger; sisters-in-law: Isabelle Jacobitz, Dorthy Jones, and Darlene Oakes; Brothers-in-law: Lester Allen, Elmer Allen, James "Jim" Allen, Marvin "Jack" Allen, Wayne Allen, and Gordon Oakes. Left to cherish her memory are her husband: Gene, of 56 years, of Ainsworth, Nebraska; children: Lorne and wife Becky of Ainsworth, Tammy Stec and husband Scott of Long Pine, Nebraska, Roger of Ainsworth, Kristine (Kristy) Schiller and husband Steve of Gillette, Wyoming; Sister, Norma DeGonzague of Sierra Vista, Arizona; Brother, Keith Smith of North Carolina; Special nephew, Mike Jensen; Grandchildren: Waylon Allen of Gillette, Wyoming, Lacey (Allen) Marbry and husband Chase, of Aurora, South Dakota, Cody Stec and wife Heather of Ainsworth, Amanda (Stec) Evans and husband Brandon of Ainsworth, Devin Allen of North Platte, Nebraska, Haylee Allen of Lemon Cove, California, Jodi Allen of Ainsworth, Savannah, Dalton, Dylan and Dane Schiller of Gillette; Great-Grandchildren: Grant Stec, of Ainsworth, Kyleigh and Treyton Allen of Gillette, Kaden and Zaine Evans of Ainsworth, Teigen and Trypp Marbry, of Aurora and many nieces and nephews. Funeral Services were held on April 11, 2013 at the Evangelical Free Church in Ainsworth, Nebraska with Pastor Mick Thornton and Bruce Beebout officiating the services. Prelude and Postlude music was provided by Dortha McGill. Special CD selections of "Sissy" Song" and "Go Rest High On That Mountain" were provided as well as a vocal selection of "It's Not The Last Mile" by Bob and Duane Keim. Pallbearers were, Wayon Allen, Cody Stec, Devin Allen, Dalton Schiller, Dylan Schiller, Dane Schiller, Mike Jensen, Brandon Evans, and Chase Marbry. Honorary Bearers were Susie's great-grandchildren and other family and friends. Burial was held at the Ainsworth Cemetery in Ainsworth. Memorials were suggested to the Sandhills Cancer Fund or to the Evangelical Free Church in Ainsworth.

Audrey "Susie" Marie Allen, age 73, was born to Stella & Howard Smith, on December 24, 1939. She departed this life and entered into the gates of heaven on April 6, 2013, at the University Medical Center after a long battle with cancer. Susie... View Obituary & Service Information

The family of Mrs. Audrey M. "Susie" Allen created this Life Tributes page to make it easy to share your memories.