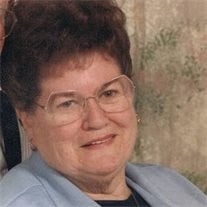 Audrey Ellen (Brewer) Christensen was born on April 28, 1927 in Ainsworth, Nebraska to Bertha C. (Roach) and Lloyd H. Brewer. When she was nine years old the family moved to Forest Grove, Oregon due to her father's ill health. (Her youngest brother, Ronald E., was born while living in Oregon.) Audrey attended the fifth grade in Oregon, after which the family returned to Ainsworth. Her father passed away on March 5, 1939 at just 39 years of age, leaving her mother to raise five children on her own. Audrey worked part time in Favinger Variety Store and Link Drug while in grade school and high school. She graduated from Ainsworth High School with the class of 1944. While a senior, she "practice taught" in a rural school south of Long Pine, Nebraska. After graduation she was employed by North Western Bell Telephone Company for 17 years as a "hello" girl and business office clerk. Audrey was united in marriage to Archie H. Christensen on August 17, 1956 at St. Pius X Catholic Church in Ainsworth. To this union, two sons were born, Robert Lee and Kent Alan. Audrey worked at the Ainsworth Flower Shop before she and Betty Blackman opened the Hobby House in Ainsworth. After several years, they sold the Hobby House, and Audrey continued doing floral arrangements and weddings from her home. She enjoyed doing crafts, knitting, and crocheting, and spending time with her grandchildren. Audrey was preceded in death by her parents, Lloyd and Bertha Brewer, the love of her life, her husband Archie of 56 good years; two sisters, Margaret R. Welke and Myrna Rae Anderson; two brothers, Donald Dean Brewer and Ronald E. Brewer. She leaves to mourn her passing, her two sons, Robert Christensen (formerly of Apache Junction Arizona,) now of Tucson, Arizona and Kent Christensen and significant other, Mindy Van Sickle of Ainsworth; five grandchildren, one great-grandchild, nieces, nephews, cousins, and a host of friends.

Audrey Ellen (Brewer) Christensen was born on April 28, 1927 in Ainsworth, Nebraska to Bertha C. (Roach) and Lloyd H. Brewer. When she was nine years old the family moved to Forest Grove, Oregon due to her father's ill health. (Her youngest... View Obituary & Service Information

The family of Mrs. Audrey E. (Brewer) Christensen created this Life Tributes page to make it easy to share your memories.