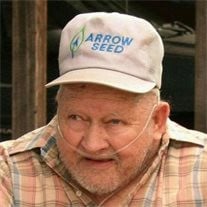 Arthur D. McDaniel Sr. was born March 18, 1936 to George Lewis McDaniel and Minnie (Jessup) McDaniel at Johnstown, Nebraska and passed away May 8, 2016 at the Antelope Memorial Hospital in Neligh, Nebraska at the age of 80 years, one month and 20 days. He grew up in Johnstown and worked as a ranch hand on various ranches around Ainsworth and the surrounding area. On October 4, 1966, Arthur was united in marriage to Julie Ann Crist and to this union was born one son and three daughters, Arthur Jr., Christina, Julyn and Jessica. Arthur enjoyed reading western books, long sightseeing drives on Nebraska back roads, working with leather crafting, ceramics, watching western movies, and just being around his family and friends. He was a kind and gentle man who would do anything for his family. His smile could light up any room. He was always able to bring laughter to those around him. Arthur was preceded in death by his parents George and Minnie; brothers, Charles, Vernon, Lewis, and George Jr.; sisters, Fern and Mable. He leaves to mourn his passing his children Arthur D. McDaniel Jr. and wife, Phoebe of Ainsworth; Christina P. Kopejtka and husband, Frank of Clearwater, Nebraska, Julyn J. Figgins and husband, Don of Belgrade, Montana, and Jessica J. McDaniel of Madison, Nebraska; 15 grandchildren and five great-grandchildren; a sister, Lois Titus of Springview, Nebraska; along with numerous nieces, nephews and other family members. Graveside Services were held on Friday, May 13, 2016 at the Ainsworth Cemetery with Pastor Bruce Beebout officiating. Special song selection of "Go Rest High On That Mountain" by Vince Gil was provided. Casket bearers were; Michael McDaniel, Anna McDaniel, Dalton McDaniel, Swade McDaniel, Douglas Bechtold, Phillip Bechtold, Dwaine McDaniel and Schanell Holmstedt. Honorary Casket bearers were all of Art's other grandchildren. Memorials were suggested to the family in his name for future designation.

Arthur D. McDaniel Sr. was born March 18, 1936 to George Lewis McDaniel and Minnie (Jessup) McDaniel at Johnstown, Nebraska and passed away May 8, 2016 at the Antelope Memorial Hospital in Neligh, Nebraska at the age of 80 years, one month and... View Obituary & Service Information

The family of Mr. Arthur D. McDaniel Sr. created this Life Tributes page to make it easy to share your memories.