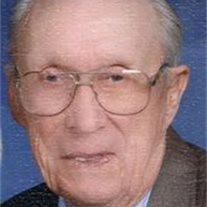 Arthur V. Heerten passed away August 23, 2016, at the Brown County Hospital in Ainsworth, Nebraska at the age of 96. He was the second son of John and Emma (Keohnken) Heerten, born on July 10, 1920, near Springview, Nebraska. Art left high school after his first year to help with the farm, later earning his GED to set a good example of the value of education for his children. Art enlisted in World War II, and was assigned to the Canyon Company 129th Infantry Regiment on November 1944, where he was sent directly to the Pacific Front. He was awarded the bronze star for bravery and acts of merit for meritorious services. He returned home from the service on Christmas day of 1945. After returning home from the service he did commercial trucking and custom combining traveling south into Oklahoma, along with farming. He was among the first to irrigate cropland in Keya Paha County. Art married Lila M. Bammerlin, on August 9, 1951, in O'Neill, Nebraska. To this marriage four children were born, Rod, Ron, Russ and Arletta. Art was an active member in the community, serving on the soil conservation board, school board, 4-H leader and election board. His greatest love was sharing the accomplishments of his children and grandchildren, whether being breaking 4-H calves to lead, blocking sheep or building a gun rack. He could always find time to help with projects with his family. In later years Art took up wood working, making numerous items, including jewelry boxes, Chinese checker board, clocks, octagon picture frames and numerous other projects. He restored tractors, (mainly tractors he had used over his 70 plus years of farming.) Art is preceded in death by his parents, John and Emma; brothers, Louis, and Wesley Heerten, and sister, Lucille (Heerten) Titus. He is survived by his devoted wife of 65 years Lila (Bammerlin) Heerten; children, Rod Heerten and wife Debbie, Ron Heerten and wife Sandra, Russ Heerten and wife Marcie all of Springview, Arletta Childress and husband Dick of Lexington, Nebraska. 14 grandchildren, Regan and Kristin Jerred, Summer and Tyler Bowling, Autumn Jerred, Kasina and Nick Fejfar, Jakob Heerten, Zachary Heerten, Patrick and Sydney Heerten, EmilyHeerten, Moriah Heerten, Erin and Jake Cole, Lee Heerten and Jessica Heerten, Jeremy and Andrea Childress, and Brad and Kristy Childress; Eight Great-Grandchildren, Elijah, Adrianna, Cadence, Tessa, Brenna, Tripp, Colin and Carter. (A final note)………Family members and friends will remember a quote from Art that he would say, "Every day is a good day, some are just better than others." Funeral Services were held on August 27, 2016 at Hoch Funeral Home in Ainsworth, Nebraska. Pastor Scott McClellen officiated over the service. Music was provided by Kristin Jerred. Special music selections of "Amazing Grace" and "When the Roll Is Called up Yonder" were provided by all of Art's granddaughters. A CD recording of "Heaven" written and performed by Kristie Sybrant Keller and Judith Sybrant Lemp was also provided. Pallbearers were grandsons, Regan Jerred, Jakob Heerten, Zachary Heerten, Patrick Heerten, Lee Heerten, Tyler Bowling, Nick Fejfar and Jake Cole. Burial with Military Honors being provided by the Ainsworth American Legion Post #79 followed at the Ainsworth Cemetery.

Arthur V. Heerten passed away August 23, 2016, at the Brown County Hospital in Ainsworth, Nebraska at the age of 96. He was the second son of John and Emma (Keohnken) Heerten, born on July 10, 1920, near Springview, Nebraska. Art left high... View Obituary & Service Information

The family of Mr. Arthur V. Heerten created this Life Tributes page to make it easy to share your memories.