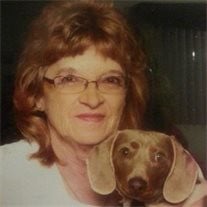 Arlynne Marie Reece, age 67, of Ainsworth suddenly entered the Kingdom of Heaven, only days after her mother died, on December 19th, 2017 at the Chadron Community Hospital. Arlynne was born on December 10th, 1950 in Lusk, Wyoming to Richard and Susanne Reece, and was the first of four daughters. She attended school in Crawford, NE until 1964 and then in Ainsworth until 1969. Afterwards, she moved to California where she was a foster parent for a special little girl for several years, then back to Ainsworth in the mid 1980's. At that time she enjoyed working at the Ainsworth nursing home along with her father, Dick Reece. Eventually, she made a move to Kentucky. She made her way back to Nebraska in 1999, first to Kearney, then finally Ainsworth to be with her parents. Many called her "Grandma" including neighbors and friends. Arlynne enjoyed being with people and family which included many extended family members. She was rarely without her beloved dachshund dogs and will be remembered for being a second parent to many children. She enjoyed being a member of the American Legion Auxiliary Club with friends and family. Arlynne is preceded in death by her parents Richard and Susanne Reece, and Uncles Frank Reece and Charles Mack. She is survived by three sisters, Carolyn (Mike) Essink of Waverly, NE, Rosalyn (Jerry) Fernau of Ainsworth, and Mollee Reece (Karl Weichman) of Kearney, NE; granddaughter LaNaha (Jairo) Orellana, and beloved great-granddaughters Alicia and Kyna Orellana. Those left to cherish her memory and whom she considered family include Edna Orellana and Santos Lazo, with children Jason, Yanira, and Arlyn of Ainsworth; the Kluthe's: Carma, Brandi, Sara, and Hunter of Minden; and best friends Donnie and Janet Schuyler of Ainsworth. Graveside services were held at the Glendale Cemetery near Crawford, NE on December 20th, 2017 with Pastor Tim McCrary officiating. Arlynne was laid to rest the same day as her mother Susie Reece. Music selections were "How Great Thou Art", and "It Is Well With My Soul". Pallbearers were Arynne's friends and family. Hoch Funeral Home of Ainsworth and Chamberlain Funeral Home and Chapel of Chadron, NE assisted with the arrangements. In lieu of flowers, memorials may be made to the donor's choice. Condolences may be sent to: Mollee Reece, 2955 99th Street Place, Kearney, NE 68845. Online condolences may be made to the family at www.hochfuneralhome.com.

Arlynne Marie Reece, age 67, of Ainsworth suddenly entered the Kingdom of Heaven, only days after her mother died, on December 19th, 2017 at the Chadron Community Hospital. Arlynne was born on December 10th, 1950 in Lusk, Wyoming to Richard... View Obituary & Service Information

The family of Arlynne Marie Reece created this Life Tributes page to make it easy to share your memories.