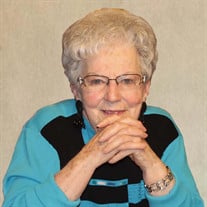 Arlene Joyce Clark was born December 30, 1933, at her family’s home on Plum Creek, near Johnstown, NE.. She was the 9th of 11 children born to William and Ida Mae (Evans) Clark. She passed away Monday, September 30, 2019 after a courageous seven-year battle with colon cancer. Her grade school years were spent in Johnstown, but she graduated from high school in Ainsworth, NE. Growing up with a group of older brothers taught her to stand her ground and not let anyone push her around. That attitude did not change throughout her life. There were many pillow fights when the folks were gone to town and perhaps even a boxing match or two as well. Arlene lost three siblings while growing up. A sister was killed in a ranch accident, another lost to a fire in a haystack, and a brother that drowned. After graduation, she taught grade school for several years around Springview, and in 1952 met and married Paul W. Gierau III. They then moved to the Gierau ranch near Wewela, South Dakota where their three daughters (Pam, Lisa, & Teri) were born. Arlene cooked many a meal for the hay crew and would pack and take it to the field because of the long distance from the house. Winters on the ranch were sometimes difficult, especially during calving season when the porch was often used to warm up newborns during blizzards. Because of her mother’s declining health, Paul and Arlene moved to Springview, NE in 1968, since it was easier for Paul to drive to the ranch than for Arlene to commute to town. Paul died from cancer in 1992, but she resided in the same house until failing health issues forced her to sell in August of 2019. Caregiving seemed to be a fact of life for Arlene. Her mother for several years in the 60’s and 70’s, for Paul in the late 80’s and 90’s, and for her daughter Lisa who died in 2010. Through it all, she remained strong and found strength in her work with the American Legion Auxiliary. Arlene attended as many of her grandkids high school events as possible, and was proud of each and every one of them. She was thrifty yet extravagant; getting up in the middle of the night she would turn off her lawn sprinklers when it was raining; her house was “cool” in the winter and “warm” in the summer until she had guests who would reposition the thermostat. Conversely, she had no qualms about spending whatever it cost to take family and friends out for supper on special occasions. Arlene was an avid golfer and enjoyed playing in tournaments--even winning a playoff for first place at Ainsworth, where she was teamed with her three daughters. Obviously, she taught them well! Arlene was preceded in death by her husband Paul, daughter Lisa Murdock, and granddaughter Megan McCormick, as well as all her older Clark brothers and sisters-Earl, Irma, Dwain, Virginia, Kenneth, Lenard, Bill and Garner. Surviving family members include her brother Jack Clark of Gregory, SD, and sister Doris Sladek of Omaha, NE; her children Pam (Chet) McCormick of Valentine, Teri (Tom) Carlstrom of St. Edward, NE, and son-in-law George Murdock of Bassett, NE; ten grandchildren Spencer Murdock, US ARMY, Martin (Carrie), Murdock of Woodbine, IA, Nick (Jordan) Murdock of Norfolk, NE, Erin (Jim) Wolf also of Norfolk, Emily (Marc) Eisenberg of Seattle ,WA, Kacie (Trevor) Dredla of Battle Creek, NE, Taylor (Tera) McCormick of O’Neill, NE, Regan (Jake) Wayman of Wichita, KS, Evan Carlstrom, of Denver, CO and Brenna (Cole) Sokol of Verdigre, NE; as well as 15 great-grandchildren. Arlene is also survived by brother-in-law Rod (Nila) Gierau of Springview and sister-in-law Mary Clark of Omaha, along with nieces, nephews, other family members and special friends Bill and Sharon Orton of Springview. “THEY JUST DON’T MAKE’UM LIKE THEY USED TO” Memorial Services were held on Monday, October 7, 2019 at the Springview United Methodist Church with Pastor Jenice Epp officiating at the services. Music arrangements were: “Could I Have This Dance” by Anne Murray, “In The Garden” by Stan Libolt and Rick Nelson, “America The Beautiful” by Haley Sladek and “My Way” by Frank Sinatra. Special Reflections were given by Brett Gierau and Scott Sladek. A Private Family Inurnment preceded the Memorial Service in the Mt. Hope Cemetery at Springview. Memorials were suggested to the family for a later designation. Hoch Funeral Home of Ainsworth was in charge of arrangements.

Arlene Joyce Clark was born December 30, 1933, at her family&#8217;s home on Plum Creek, near Johnstown, NE.. She was the 9th of 11 children born to William and Ida Mae (Evans) Clark. She passed away Monday, September 30, 2019 after a courageous... View Obituary & Service Information

The family of Mrs. Arlene J. (Clark) Gierau created this Life Tributes page to make it easy to share your memories.