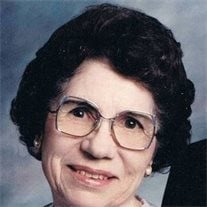 Ardis Ione (Beebout) Johnson, daughter of LeRoy and Rosa (Akert) Beebout was born January 4, 1916 at the family home in Johnstown, Nebraska. She passed away on Tuesday, November 10, 2015 at the Good Samaritan Society in Atkinson, Nebraska. It was 30 below zero the night she was born. Dr. Cameron delivered her assisted by his wife. Her mother Rosa later said, "that the old wood stove was just roaring". She grew up in a loving family of eight children who remained close all of their lives. She attended grade and high school in Johnstown, graduating in 1934 as Valedictorian. After graduation she worked for 4 years for her father LeRoy at the family newspaper, the Johnstown Enterprise. Ardis then moved to Ainsworth, Nebraska and roomed with her older sister Lois in the home of Ruth McAndrew. She worked at Young's Grocery Store for 5 years, a job she loved. In a home wedding on January 10, 1943, she married Wayne L. Johnson of rural Johnstown. After their marriage they lived at the Art Schlueter ranch south of Wood Lake, Nebraska, where Wayne was employed. In 1944, Wayne enlisted in the U.S. Navy. After basic training he was sent to Gulfport, Mississippi where Ardis and their daughter Deanna joined him. From there they moved to Richmond, Virginia until he was deployed to the Philippines. Ardis and Deanna spent the remainder of the war years living with Wayne's parents, Earl and Edith Johnson. After the war they moved to a farm northwest of Johnstown, where Wayne farmed and began feeding cattle which he continued for the rest of his life. Moving closer to Ainsworth, they settled on the home place in 1954. Three more children joined the family, Linda, Gregg and Kevin. She enjoyed her life as a farm wife and mother. Her children and grandchildren will always remember what a good cook she was. Ardis and Wayne were active members of the Nebraska Cattlemen's Association and the Republican Party. She was always willing to work alongside of her husband in any endeavor and was his biggest cheerleader. They cherished lifelong friendships with members of their card club and also belonged to a square dance club. Ardis was a devoted wife, mother, and grandmother, and spent her entire life thinking of others. She was a member of the United Methodist Church for over 80 years. Her quiet and gentle soul exemplified her faith in God and gave her the grace to withstand the trials of life. She leaves her family with precious memories and a godly heritage. Ardis was preceded in death by her husband, Wayne; her parents, LeRoy and Rosa Beebout; brothers, Willard and Allan; sisters, Lois Beebout and Leona Morrow. She is survived by sons, Gregg, and Kevin and wife, Carolyn; daughters, Deanna Taylor and husband Don, and Linda Trail all of Ainsworth; thirteen grandchildren and twenty-one great-grandchildren; brothers, Merlin Beebout of Ainsworth and William Larmer Beebout and wife Pat of Lincoln, Nebraska; a sister, Shirley Burger of Ainsworth; brothers-in-law, Brent Johnson and wife Karen of Johnstown, Bruce Johnson and wife Jeane of Ainsworth; sisters-in-law; Vivien Johnson of Ainsworth and June Barker Biggs of Quincy, California and many nephews, nieces and friends. Funeral Services were held on Saturday, November 14, 2015 at the United Methodist Church in Ainsworth, Nebraska. Officiating the service were Pastor Bruce Beebout, and Kent Taylor. Special music was provided by Linn Baxter and Monte Burger. Pallbearers were, Gary Taylor, David Trail, Rhett Taylor, Julie Benes, Joshua Trail, Matthew Trail, Kirby Johnson, Cory Johnson, Case Johnson, Kirsten Sholes, Michael Sholes and Kellie Sholes. Burial followed at the Ainsworth Cemetery under the direction of Hoch Funeral Home of Ainsworth. Memorials were suggested to the family, the Ainsworth American Legion Post #79 for a future Brown County Veterans Memorial Wall, or to the Ainsworth United Methodist Church.

Ardis Ione (Beebout) Johnson, daughter of LeRoy and Rosa (Akert) Beebout was born January 4, 1916 at the family home in Johnstown, Nebraska. She passed away on Tuesday, November 10, 2015 at the Good Samaritan Society in Atkinson, Nebraska. It... View Obituary & Service Information

The family of Mrs. Ardis I. (Beebout) Johnson created this Life Tributes page to make it easy to share your memories.