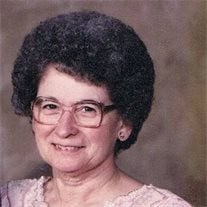 Ardeth Arlene Coleman was born May 8, 1924 to Leslie and Rita (Johnson) Sawle, and passed away peacefully on October 10, 2016. She grew up north of Ainsworth on the Sawle Brothers farm. Ardeth loved to learn and was appreciative of her teachers in rural school District 11 and at Ainsworth High School where Ardeth graduated valedictorian of her class. Her marriage right after her high school graduation to Rex Coleman on May 21, 1942 did not end her formal education. Through the years she earned 12 hours of college credit, mostly in the area of writing, participated in many art workshops, and studied geology several years with a small group led by Marie Skinner. Rex and Ardeth raised Larry and Charlotte with the expectation that they would attend college and the fact that they did was a source of pride for them. Ardeth's faith in God was nurtured first at Highland Grove Methodist Church as a child and then in the Ainsworth Methodist Church as an adult. Ardeth honored her commitment to her church and to God by accepting a variety of positions at the local, district, and conference level. One of her special opportunities was serving as a camp counselor in the very first camp held at Camp Fontanelle, which was organized by our own Reverend Joe Roe. After moving to town, she was part of a neighborhood Bible Study group that went through the entire Bible several times. Through the years, Ardeth enjoyed being a part of the Extension Club, participating in community events and was instrumental in establishing Ainsworth Art Guild. She painted many pictures in acrylic, watercolor, and pastel. Ardeth designed two of the stained glass windows in the sanctuary and the Addie Eule memorial stained glass window in the narthex. Her creativity extended to writing as well. She wrote essays, manuscripts for 4 books, as well as a few letters to the editor of the newspaper! After Larry and Charlotte graduated from High School, Ardeth and Rex cared for several foster children. This led to taking Dale, Frank, Sharlene, and Rhonda Mapes into their home for 7 years and into their hearts forever. Ardeth was a positive, kind, and compassionate person, who had a way of making everything she touched beautiful. Even in her last years, she continued to be caring and protective of others, putting their needs ahead of her own. Ardeth was not afraid to try new things and when she tackled a problem, it was fun to see how she created a solution. To Ardeth, hospitality meant always having cookies in the freezer and pies on the countertop! Ardeth's beautiful smile and quick humor endeared her to all she met. Ardeth was preceded in death by husband Rex Coleman, parents, Les and Rita Sawle, sister Doris Marsh and her husband Mervin, brother Harry Sawle and his wife Verta , brother-in-law Glen Coleman and wives Margaret and Lois, sister-in-law Marjorie French and husband Jim, infant daughter, Linda Mae Coleman, daughter-in-law, Judith Coleman, foster daughter-in-law Dorothy Mapes, and one foster grandson, Clinton Eli Mapes. Left to cherish her memory are her son Larry Coleman of Harrisburg PA, daughter Charlotte Griffith of Columbus, Nebraska, grandchildren Matthew Coleman of Wall New Jersey, Tim Coleman of Grand Rapids Michigan, Joel (Niki) Coleman of York PA, Stephen (Jessica) Coleman of Zillow, PA, Brent (Jessica) Griffith of St. Paul, MN, Karen (Mark) Griffith Dieterich of Bristol RI.; 15 Great- Grandchildren, foster children Dale Mapes of Ainsworth, Frank Mapes, of Shamokin PA, Sharlene, (Ken) Robinson of Mead, NE and Rhonda (Kevin) Swick, of Lincoln NE; 9 foster great-grandchildren, and many other extended family members and friends. Funeral services were held on October 15, 2016 at the United Methodist Church in Ainsworth with Pastor David Randall officiating over the service. Music was provided by Sherry Campbell. Congregational selections were, "Victory In Jesus" and "I'll Fly Away." Special musical selections were, "Because He Lives" by Joel Coleman, "Heaven's Song" by Stephen Coleman, and "Amazing Grace" as a flute instrumental at the cemetery by Joel Coleman. A tribute to Ardeth was given by Karen Griffith-Dieterich. Casket bearers were, Tim Coleman, Stephen Coleman, Karen-Griffith-Dieterich, Joel Coleman, Brent Griffith, Dale Mapes and Casey Duden. Honorary bearers were Ardeth's Methodist Church Family. Burial followed at the Ainsworth Cemetery under the direction of Hoch Funeral Home. In lieu of flowers, memorials were suggested to the American Parkinson's Foundation, or to the Ainsworth United Methodist Church.

Ardeth Arlene Coleman was born May 8, 1924 to Leslie and Rita (Johnson) Sawle, and passed away peacefully on October 10, 2016. She grew up north of Ainsworth on the Sawle Brothers farm. Ardeth loved to learn and was appreciative of her teachers... View Obituary & Service Information

The family of Mrs. Ardeth A. (Sawle) Coleman created this Life Tributes page to make it easy to share your memories.