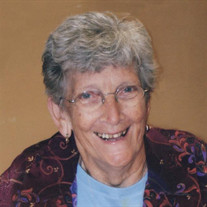 ARDELLE MARLENE (POTRATZ) FISCHER Ardelle Marlene (Potratz) Fischer was born on September 13, 1932 to Walter & Mildred (Crook) Potratz. A sister, Janelle, and foster brother, Ray Boleschka, made their family complete. Ardelle spent her childhood years with her family on a ranch south of Bassett and she attended the Thurman country school. As a young teenage girl, she was a cheerleader for the football team, and had no clue she was cheering for the man who would become her husband for the next 67 years. Ardelle married Larry Fischer in the family living room on November 23, 1950. After they were married they went on a honeymoon to Scribner, Nebraska, staying with an aunt and uncle. Not only did they snuggle as honeymooners, they also had to stay exceptionally warm as the plants frosted in the house that night. They began their marriage and journey through life together living with Ardelle’s parents from November to March. Following that they moved to the Potratz Ranch. It was there that they began their family and were blessed with three children. Nickie, Allen “Butch,” and Benny “Russell”. They ranched, raised their children, and lived there until 1973 when Larry and Ardelle bought their present home in town. Besides helping on the ranch, taking care of and following her children, Ardelle worked at the Ben Franklin Store in Bassett for 20+ years. She had an adventurous life, and on one occasion had to break up a front yard fight between Butch and Ben with a pitch fork! She was always afraid of water and couldn’t swim a lick. One day, while spending time at the Carnes Bridge, Larry and Roger decided they were going to teach her to swim. Low and behold, when she couldn’t touch the bottom, her feet and legs were flying and she nearly drowned Larry trying to get out of the river. While on drives, she enjoyed counting windmills, cedar trees and baby calves. Following her first time as a resident in the Rock County Long Term Care, one of the nurses commented that she was the first patient to ever walk out of there on her own. She was extremely proud of that moment. Her pride and joy were her grandchildren and great-grandchildren and she cherished their visits whether it was five minutes or all afternoon. You could always bet she would tell them “don’t forget where we live” as they walked out the door. When asked how she was doing, she would usually reply “Bitchy…….I will be that way by the end of the day so I might as well start out that way”. Ardelle left this world we know on Thursday morning, October 11, 2018, and is reunited in heaven with her parents, Walter and Mildred Potratz, sister, Janelle Shaw, foster brother, Roy Boleschka, mother and father-in-law, Al and Emma Fischer, son-in-law, Dennis Fletcher, brothers-in-law, Lyle Fischer and Roger Fischer, sister-in-law, Glenna Fischer, nephew Todd Gordon and niece Debbie Gordon. She is survived by her husband of nearly 68 years, Larry, daughter Nickie, and husband, Larry Buell of Long Pine, Nebraska, sons, Allen “Butch” and wife Deb, and Ben and wife Lisa, all of Bassett. Seven grandchildren; Shelby (Jarod) Steenson, Devon Nelson, Brandon (Michael) Buell, Clay (Kayla) Fischer, Kari (Jason) Anderson, Corby (Jenny) Fischer, Lucas (Jess) Fischer. Thirteen great-grandchildren; Treyton Ruhl, Ashly Nelson, Ty Nelson, Jaya Nelson, Kyle Jackman, Keian Fischer, Karley Anderson, Branson Anderson, Isley Fischer, Wyatt Fischer, Harlee Fischer, Leighton Fischer and Hudsynn Fischer. Sisters and brothers in-law; Wayne Shaw of Billings, Montana, Ted and Marlene Johnson of Rapid City, South Dakota, Ione Fischer of Bassett and Lyle and Carol June Gordon of Holmen, Wisconsin, along with numerous nieces and nephews and a host of other family and friends. Funeral services were held on Monday, October 15, 2018 at the St. Peter Lutheran Church in Bassett, Nebraska with Nancy Moore, PMA and Pastor Wayne Owens officiating. Music was provided by Evelyn Armstrong. Congregational hymn of “My Faith Looks Up To Thee,” and CD selections of “Angels Among Us” by Alabama, “Go Rest High On That Mountain” by Vince Gill, “Lead Me Home” by Jeremy Johnson and “Jealous of the Angels” by Jenn Bostic were provided. Pall bearers were: Clay Fischer, Corby Fischer, Lucas Fischer, Brandon Buell, Jason Anderson and Jarod Steenson. Honorary pall bearers were all of Ardelle’s other grandchildren and great-grandchildren. Burial followed the service at the Bassett Memorial Park Cemetery. Hoch Funeral Home of Bassett was in charge of the arrangements. In lieu of flowers, memorials are suggested to the St. Peter Lutheran Church, Rock County Hospital Long Term Care or the Senior Center, all in Bassett.

The family of Mrs. Ardelle M. Fischer created this Life Tributes page to make it easy to share your memories.