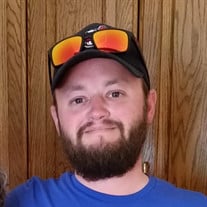 Anthony “Tony” Mikel Day was born on May 21, 1987 in Coeur d’Alene, Idaho and later lived in Wynot, Nebraska. Growing up, Tony enjoyed swimming, reading, and being able to attend the State Spelling Bee. He attended Ainsworth High School where he was involved in football, band, track, FBLA, and on the lighting crew for Thespians. Like most teenagers, he constantly tested the waters to see what he could get by with, but also made life-long friends. He was an active member of his Ainsworth United Methodist Church and Youth Group where he was surrounded by a community of faith to support him. He was able to go on several mission trips with the Youth Group. Along with Dustin and Phil, he enjoyed numerous scouting adventures with Troop #1194. This included a canoe trip to the Boundary Waters, hiking and biking in the Black Hills, and many campouts. He worked at Big Johns where John had to put up with his teasing and pranks. During High School, he worked on rebuilding a ’67 Cougar with Phil and especially enjoyed driving it and taking it to car shows with the family. Tony enjoyed the family outings, which included yearly camping trips in the camper van to Colorado, Wyoming, and the Black Hills; hunting, and attending gatherings with his grandparents and cousins. He loved friendly competitions at games, cards, and cook-offs! After graduating from AHS in 2006, he attended Wayne State College where he studied Criminal Justice and worked part time at Runza and Casey’s. One summer he worked on a farm/ranch near Johnstown, Nebraska. Getting antsy to enter the working world, Tony entered employment at Great Dane Manufacturing in Wayne, Nebraska and later at Norfolk Iron and Metal. After a few years at these jobs, he redefined his goals and entered the Staff Training Academy in Lincoln, Nebraska, proudly graduating with his class in 2013 as Officer Day. He moved to Auburn, Nebraska and began his career in the corrections profession at Tecumseh State Prison, in Tecumseh, Nebraska. He was up to the challenges of the job and continued advancing, becoming Sergeant Day with sights of reaching Lieutenant. It was a blessing for him to become part of a co-worker family, a tight-knit group he enjoyed spending time with. Tony was up for any adventure with his friends that included movies, tanking, fishing, Husker games, fantasy football, going to Comedy Club and more. Last year, he became a proud home owner in Tecumseh and spent time fixing up his house and caring for his adopted rescue pets. Tony will be remembered for his sense of humor and jovial spirit. He also made us proud by his ability to persevere through unfortunate circumstances and come out thriving, living a happy life. He built lasting relationships with his family and friends that will stay in all our hearts. Left to celebrate his life and cherish times together are his parents, Phil and Marsha Fuchs of Ainsworth, Nebraska, brothers, Dustin Fuchs, of Mukilteo, Washington, Daniel Schulte of Fort Sill, Oklahoma, Dale Schulte of Texas; Grandma Julia Fuchs of Belden, Nebraska, Grandma Emogene Whitten of Omaha, Nebraska; Rich and Patty Schulte (sister to Phil) also of Belden, Julianna Schulte of Seattle, Washington, Christina Schulte of Juneau, Alaska, and Rachael Schulte of Columbia, Missouri; his goddaughter, Gabriella Marmolejo of Norfolk, Nebraska and many other family members and friends. Welcoming him to heaven are his Grandpa Lawrence Fuchs, Grandpa John Whitten and Uncle Roger Fuchs, who were all so special to him. Memorial Services were held on December 5, 2018 at the First Baptist Church in Tecumseh, Nebraska. Chaplin Mike Carr officiated the service. Recorded selections of “Turn, Turn, Turn” by the Byrds, and “Save a Place for Me” by Matthew West were provided. Honorary bearers were TSCI Staff. Presentation of the flag was given by: NDCS Honor Guard and TSCI Staff. A follow up service then took place on December 7, 2018 at the United Methodist Church in Ainsworth. Pastor David Randall officiated the service. A piano solo of “My Way” was provided by Sherry Campbell. Joe Mc Bride sang the selection of “Turn, Turn, Turn”, and a CD selection of “Save a Place for Me” by Matthew West was also provided. Pallbearers were, Austin Lucht, Brandon Hardy, Robert “Taco” Marmolejo, Brandon Wagner, Chad Brown, and Larry Strubel. Honorary bearers were, Dale Schulte, Daniel Schulte, Julianna Schulte, Christina Schulte, Rachael Schulte, Derric Fuchs, Trista Hughes, Gideon Fuchs, Logan Fuchs, Josh Fuchs, Chris Fuchs, Ian Fuchs, Katelin Fuchs, and Garrett Fuchs. Presentation of the flag was again given by: NDCS Honor Guard and TSCI Staff. Inurnment followed at the Ainsworth Cemetery in Ainsworth, Nebraska. In lieu of flowers, memorials were suggested to the family for future designation. Wherry Mortuary of Tecumseh and Hoch Funeral Home of Ainsworth assisted with the arrangements.

Anthony &#8220;Tony&#8221; Mikel Day was born on May 21, 1987 in Coeur d&#8217;Alene, Idaho and later lived in Wynot, Nebraska. Growing up, Tony enjoyed swimming, reading, and being able to attend the State Spelling Bee. He attended Ainsworth... View Obituary & Service Information

The family of Mr Anthony "Tony" Mikel Day created this Life Tributes page to make it easy to share your memories.