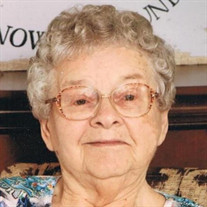 Hannelore “Ann” (Arnold) Vaughan was born on March 7, 1928 in Frankfurt, Germany to Heinrich and Friederike (Dietz) Arnold. Ann passed away on Sunday, (August 8, 2021) at the Rock County Hospital Long Term Care Center in Bassett, Nebraska. Ann grew up in a war torn Germany where she attended twelve years of year-round public school. She received special training in business school and then attended a school of languages, graduating with what was then equivalent to a Bachelors Degree here in the United States. At the age of nineteen, she met her future husband Warren Vaughan who was stationed in Frankfurt with the United States Army occupation forces. Ann later traveled to the United States where she and Warren were united in marriage on September 20, 1947. To this union were born two sons, Michael and Jerry. Ann and her husband lived for a time in Springview, Nebraska before making their home north of Ainsworth, Nebraska on Old Hwy 7. Ann’s mother later joined them here in 1951. Ann worked at different places, including, the REA office and The Commercial National Bank. She was proud to be a United States citizen, and held the President position of the VFW Ladies Auxiliary for years and laid the wreath at the annual Memorial Day Service. Ann loved her Lord and Savior and was an active member of the Zion Lutheran Church in Ainsworth where she sang in the choir and participated in the bible study. Ann also volunteered her time for the March of Dimes and the Brown County Hospital Auxiliary. Ann loved America and the American flag which liberated her home country. She taught flag etiquette in the local town and rural schools. She also translated letters written in German for local residents. She is preceded in death by her parents and husband, Warren. Ann is survived by her son, Michael and wife, Laura of Durham, Maine and son, Jerry and wife Carol of Brunswick, Maine; grandchildren, Jennifer, Hillarie, Ryan and Kody; great-grandchildren; nieces, nephews and other family members. Funeral Services were held on Friday, August 13, 2021at the Hoch Funeral Home in Ainsworth with Pastor Georg Williams officiating at the service. The music was provided by Georgia Williams and the congregational hymn of “Beautiful Savior” was sung. Interment followed in Ainsworth Cemetery at Ainsworth, Nebraska. Casket Bearers were: Kody Vaughan, Ryan Dube, Craig Smith, Brian Johnson, Brian Vogelsang and Dale Zwieble. Memorials were suggested to the Brown County Hospital Auxiliary or to the Sandhills Cancer Fund in her name. Hoch Funeral Home of Ainsworth was entrusted with the service arrangements. Online Condolences may be left for the family at www.hochfuneralhome.com.

The family of Ann (Arnold) Vaughan created this Life Tributes page to make it easy to share your memories.