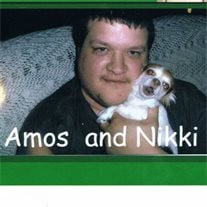 Amos Gene Assarsson was born on September 8th, 1981 at the Brown County Hospital in Ainsworth, Nebraska. He passed away on Saturday, May 18th, 2013 at the Good Samaritan Hospital in Kearney, Nebraska at the age of 31 years. Amos was the third oldest of four boys. His love for his three brothers, Josh, Lee and Festus was overwhelming. He enjoyed spending time fishing, hunting, mudding and playing X Box 360. He loved spending time with his two dogs Nikki and Cloe. After completing the 11th grade, Amos worked for Mr. Tire in Ainsworth. At the age of 21, Amos broke his back in a motorcycle accident which left him partially paralyzed. He then went home to live with his parents and his little brother Festus. Amos enjoyed spending time with Josh. When he would come home they would go cruising and hang out. He had a kind heart and would always take the time to stop and visit with you at anytime. In 2012, Amos lost his best friend and brother, Lee. He stayed strong and helped his mom and family through the hard times and he never gave up. He enjoyed all of his family, friends and fellow members of the AA group. Amos is preceded in death by his brother, Lee Roy; grandfathers, Shep Strand and Terry Oman; great-grandparents, Jim and Gaythel Fox; great-grandfather, Fred Assarsson. He is survived by his parents, Bill and Deb Assarsson of Ainsworth; brothers, Josh of Sioux Falls, South Dakota and Festus of Ainsworth; sister-in-law, Brooke Assarsson of Ainsworth; grandparents, Elizabeth Strand of Ainsworth, Virginia Oman of Kearney, Nebraska, Clifford and Pauline Assarsson of Ainsworth; great-grandmother Ruth Assarsson of Bassett, Nebrask and a host of uncles, aunts and many relatives. Funeral Services were held on May 23, 2013 at Hoch Funeral Home for Amos G. Assarsson with Pastor Georg Williams officiating over the service. Special CD selections of "Amazing Grace" by the Statler Brothers and "On The Wings of a Dove" by Ferlin Huskey were offered. Casket bearers were, Casey Duden, Tom Ford, Daniel Tachovsky, Joe McIntosh, Kevin Price, George Spanel, Gerald Watts, and Scotty Clark. Honorary bearers were Fellow Members of his AA Group. Burial was held at the Bassett Memorial Park Cemetery in Bassett, Nebraska.

Amos Gene Assarsson was born on September 8th, 1981 at the Brown County Hospital in Ainsworth, Nebraska. He passed away on Saturday, May 18th, 2013 at the Good Samaritan Hospital in Kearney, Nebraska at the age of 31 years. Amos was the third... View Obituary & Service Information

The family of Amos G. Assarsson created this Life Tributes page to make it easy to share your memories.

Amos Gene Assarsson was born on September 8th, 1981 at the Brown...