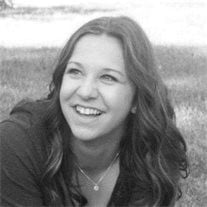 Amber Annette Frerichs was God's gift to this world in the early morning hours of October 25th, 1995, at the Cherry County Hospital in Valentine, Nebraska. Welcoming her were her parents Barry and Amy Frerichs and two year old brother Brennan Frerichs of rural Long Pine, Nebraska. She and Brennan enjoyed a childhood filled with adventures out in the trees, building their fort, watching "Out of the Box", doing their best at the related craft projects with Amy, and just growing up as each other's best friends. She spent the rest of her life as a full time student, beginning with kindergarten at Bassett Grade School in the August of 2001, continuing through graduation from Rock County High School in May of 2014. She then enrolled at the University of Nebraska – Kearney and studied Athletic Training and Exercise Science. Sports were one of Amber's passions, beginning with T-ball at the age of four. She also competed in baseball, softball, volleyball, basketball, and track & field, earning All-Niobrara Valley Conference honors in volleyball and track, and qualifying all four years of high school for events at the Norfolk Track and Field Classic and the Nebraska High School State Track Meet. The athletic accomplishments she was most proud of were her 3rd place finish at the Norfolk Classic in the 800-meter run as a senior, and her 3200-meter relay team that placed 8th at the State Meet as a freshman and broke the previous school record. She was always a runner, and had plans to participate in the Lincoln Half-Marathon and a Warrior Dash during the summer of 2017. Amber was involved in 4-H, learning and loving photography. She was also passionate about FFA, holding chapter offices for three years, her senior year as president. She learned many life lessons and was eternally grateful for all the memories and friends she made in FFA. Her spiritual life began with baptism and an upbringing in the St. Peter Lutheran Church family. She enjoyed Sunday School and time at Cleveland Church Camp. She was confirmed in the Lutheran faith and was an active participant in the BASIC Youth Group and The Way Youth Group. Outdoor recreation and watersports were a love of Amber's. She learned to swim at a very early age and spent many afternoons at the Bassett Pool. As soon as she was old enough, she worked summers there as a lifeguard and manager. Throughout her life, she enjoyed boating, tubing and jet skiing in the summers, and recently skiing, snow-tubing and snowmobiling in the winter. She loved the time spent with her family and friends camping, with many weekends spent at the Calamus and Gavin's Point, one memorable trip to Yellowstone, and many trips to the Black Hills. She also enjoyed hunting, tagging a white-tail buck when she was twelve. One of her favorite annual "holidays" was deer camp with her extended family at the Rock Creek cabin. Amber was always a competitor, with a fearless and adventurous spirit. She lived for the experience and the memories, with no regrets. She was always sprinting into the future, pouring her entire being into whatever task was put before her. She was not a loner, preferring to be surrounded by friends and family. It was this personality that caused her to become true friends with nearly everyone she met. Her world of friends grew exponentially after she arrived at UNK and became a part of the Loper family. A love for children was also one of her traits, which was evident when she taught swimming lessons. It became even more pronounced when she started working at SonShine World day care while a student in Kearney. The "family" she enjoyed there will greatly miss her. It is true that family was the MOST important thing in Amber's life. The picture she kept in her car, where she could always see it, was of her whole Frerichs family at the baptism of her cousin's first child. On February 4th, 2017, Amber left this earthly world, the victim of a tragic accident, and is now joined forever with her Lord and Savior Jesus Christ. She now lives in the hearts of those she has left behind, including her parents Barry and Amy Frerichs, Bassett, NE; brother Brennan Frerichs and Anna Kiewra, Kearney, NE; grandparents Gary and Diane Frerichs, Coleridge, NE; Mary and Terry Foxworthy, Bassett, NE; Ken and Grace Brenneman, Plattsmouth, NE; aunts and uncles Bret and Ronda Frerichs, Omaha, NE; Rob and Jodi Foxworthy, Malmo, NE, Amy and Adam Holst, Weston, NE and Carey Foxworthy and Matt Lile, Gretna, NE; many cousins; and all of her countless friends. Funeral Services were held at the Rock County High School Gymnasium in Bassett, Nebraska with Pastor John Brink and Pastor Dennis Quigley officiated the service. Many special memories of Amber were shared, as well as a video presentation. Casket bearers were Adam Holst, Steven Holst, Rob Foxworthy, Bret Frerichs, Joe Frerichs, and Jon Alstrom. Interment followed at the Bassett Memorial Park Cemetery under the direction of Hoch Funeral Home of Bassett. In lieu of flowers, memorials are suggested to the family for a future scholarship in Amber's name.

Amber Annette Frerichs was God's gift to this world in the early morning hours of October 25th, 1995, at the Cherry County Hospital in Valentine, Nebraska. Welcoming her were her parents Barry and Amy Frerichs and two year old brother Brennan... View Obituary & Service Information

The family of Amber A Frerichs created this Life Tributes page to make it easy to share your memories.

Amber Annette Frerichs was God&#39;s gift to this world in the early...