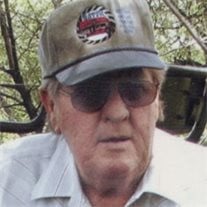 Gene A. Allen, age 80, was born to Martha (Farris) and Clarence Allen on January 31, 1937, in Ainsworth, Nebraska. He departed this life and entered into the gates of Heaven on August 19, 2017. Gene was baptized and became a member of the Highland Grove Church on Palm Sunday, March 21, 1948. On that blessed day, other members of his family were also baptized, including his mother Martha, sisters Wauneta, Evelyn and Darlene and brother Wayne. In his younger years he enjoyed spending time with his friends, roller-skating, hunting, fishing, and spending time outdoors. It was at the roller skating rink where he met the love of his life, Audrey Smith. On July 17, 1957, they were united in marriage at the United Methodist Church in Ainsworth. Together they were blessed with four children; Lorne, Tammy, Roger, and Kristine "Kristy". Gene was a loving husband, father, grandfather, and great-grandfather. He thoroughly enjoyed spending time with his family, and visits from nieces and nephews. Gene loved teasing and spoiling his grandchildren and great-grandchildren. Later in life, Gene's passion was his dog Nikki. She brought him comfort and joy, as they were inseparable. During his lifetime he worked in numerous places including ranch hand for his brother Jim, brother-in-law Harold Hill, Masters Petroleum, and Rogers Feed Mill. In 1959 he began his 36 year career in the construction field with Peter Kiewit and the James E. Simon Company where he then retired in 1995. Music was a big part of his life. Every family gathering consisted of singing, dancing and playing music. Gene played several different instruments and taught his sons, nieces, nephews, and grandchildren how to play a variety of instruments. Some of his most precious memories were when he went antique tractor pulling with his two sons and his son-in-law. He traveled all over Nebraska, Kansas, South Dakota, Colorado, and as far south as Texas. In March of 2001, Gene was points runner up in the Division II 6000 lb. Class of the National Antique Tractor Pullers Association. He was preceded in death by his wife Audrey "Susie" Allen; parents Clarence and Martha; sisters Isabelle Jacobitz, Evelyn Hill, Dorothy Jones, and Darlene Oakes; brothers James "Jim" Allen, Marvin "Jack" Allen, Lester Allen, Elmer Allen, Wayne Allen; brothers-in-law, Marvin Jacobitz, Harold Hill, Gordon Oakes; sisters-in-law, Dora Allen, Cleona Allen, Nadine Allen, and Evelyn Allen. Left to cherish his memory are his children, Lorne and wife Becky Allen of Ainsworth, Tammy and husband Scott Stec of Long Pine, Nebraska, Roger Allen and friend Betty Bradley of Ainsworth, Kristine "Kristy" and husband Steve Schiller of Gillette, Wyoming; grandchildren, Waylon Allen of Ainsworth, Lacey (Allen) and husband Chase Marbry of Locust, North Carolina, Cody Stec and wife Heather of Ainsworth, Amanda (Stec) and husband Brandon Evans of Ainsworth, Devin Allen and friend Tasha of Grand Island, Nebraska, Haylee Allen of Lemon Cove, California, Jody Allen of Ainsworth, Savannah (Schiller) and husband Rance Maddocks, Dalton, Dylan, and Dane Schiller, all of Gillette; great-grandchildren, Grant Stec, Kyleigh and Treyton Allen, Kaden and Zaine Evans, all of Ainsworth, Teigen, Trypp, and Cord Marbry of Locust, and Ezra Maddocks of Gillette. Memorials are suggested to the Sandhills Rod and Gun Club or Sandhills Cancer Fund.

Gene A. Allen, age 80, was born to Martha (Farris) and Clarence Allen on January 31, 1937, in Ainsworth, Nebraska. He departed this life and entered into the gates of Heaven on August 19, 2017. Gene was baptized and became a member of the... View Obituary & Service Information

The family of Gene A. Allen created this Life Tributes page to make it easy to share your memories.