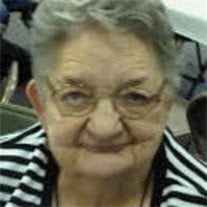 Alice A. (McCallum) Crooker was born on April 22, 1931 to David and Lillie (Petet) McCallum in Anselmo, Nebraska. Due to the death of her mother, she stayed with her Aunt Bertha and Uncle Charlie in Myrna, Nebraska. She graduated from Mason City, Nebraska and went on to teach in the Mullen, Nebraska area. On August 11, 1952, she married Carl "Bud" Crooker in Broken Bow, Nebraska. Bud and Alice moved to a ranch south of Wood Lake. To this union, they were blessed with seven children. David, Georgia, Linda, Marie, Larry, (who died in infancy), Lillie and Joe. After moving to Ainsworth, she was employed at Masters Nite and Day Cafe, and then upon moving to Long Pine, Nebraska, she worked at Hidden Paradise. After Bud retired, they moved back to Ainsworth. Until the last 2 years she resided with her daughter, Lillie until the end of May of 2014, and then she was a resident at the Good Samaritan Society in Atkinson, Nebraska, finally being transferred to the Ainsworth Care Center where she spent her final hours. Alice was preceded in death by her husband Bud, son Larry, grandson Ricky, parents, David and Lillie, brothers, Clarence, and Oscar, sisters, Mae and Thelma. She is survived by her children; Dave Crooker and wife Barb of Long Pine, Nebraska, Georgia Gaskins and husband Jerry of Paonia, Colorado, Linda Strand and husband Rick of Ainsworth, Marie Kenton of Holdrege, Nebraska, Lillie Parkison of Ainsworth, and Joe Crooker and wife Tammy of Ainsworth. A cousin, Mary Kank, of Broken Bow, Nebraska (whom she considered a "sister by heart." 15 Grandchildren, 26 Great-grandchildren, and 3 great-great-grandchildren. Along with nieces, nephews and other family members. Funeral services were held on August 28, 2014 at 1:30 PM at the Assembly of God Church in Ainsworth, Nebraska with Pastor Gary Graesser officiating the service. Music was provided by Marjorie Wilkins. Special CD selections of ""Old Rugged Cross" by Tennessee Ernie Ford, "In The Garden" by Jim Reeves and "How Great Thou Art" by Connie Smith were also provided. Casket bearers were, Rayn Crooker, CJ Strand, Bobby Crooker, Joe Crooker Jr., Thomas Hodson, Jeremy Richards, Grant Kenton, Mary Kenton and Tarz Mizner. Honorary bearers were, all of Alice's grandchildren, great-grandchildren and great-great-grandchildren. Burial was held at the Giles Cemetery in Elsmere, Nebraska under the direction of Hoch Funeral Home in Ainsworth. In lieu of flowers, memorials were directed to the Sandhills Cancer Fund or to the Diabetes Association.

Alice A. (McCallum) Crooker was born on April 22, 1931 to David and Lillie (Petet) McCallum in Anselmo, Nebraska. Due to the death of her mother, she stayed with her Aunt Bertha and Uncle Charlie in Myrna, Nebraska. She graduated from Mason... View Obituary & Service Information

The family of Mrs. Alice A. (McCallum) Crooker created this Life Tributes page to make it easy to share your memories.