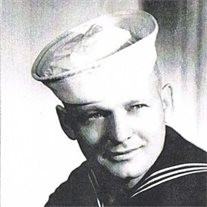 Alfred Ernest "Shippy" Schipporeit, age 87, passed away July 26, 2017 at Brookstone View in Broken Bow, Nebraska. Al was born on the Schipporeit Ranch north of Brewster, Nebraska in German Valley, May 21, 1930 to Ernest and Bertha (Weihs) Schipporeit. Al was baptized and confirmed at St. John's Lutheran Church in German Valley. After starting his education in a one room country school District #20, he graduated from Brewster Rural High School. Al helped his parents on the ranch along with his sisters Irene and Bette until 1952, when he became a member of the Naval Air Reserve, located in Lincoln, Nebraska. He requested active duty and was deployed June 1, 1953, a time during the Korean War and became the navigator of a PBM seaplane. While stationed at the Alameda Naval Air Station in California he met Marilyn Jean Gilbert in April 1955 and they were married September 18, 1955 in Salinas, California. Following their honeymoon they returned to German Valley to live on the ranch. Their union was blessed with three children, Mona Jean, Eric Alfred, and Kenton Thane. Alfred served as organist at St. John's Lutheran Church and in 1969 the family joined Zion Lutheran Church in Ainsworth. Alfred was active in many aspects of the church. Alfred served on various school boards for 21 years and his greatest satisfaction was being a part in the consolidating and building of a county wide school system, namely Sandhills Public School. He also served as Blaine County Veteran Service Officer retiring in 2009 after 36 years of dedicated service to the veterans and dependents. He was a lifelong member spanning 50 continuous years of the American Legion Post #323 at Brewster. Apart from ranching, photography was one of Al's hobbies. He has taken many graduation, wedding and family photos through the years. Carpentry was another enjoyment working along side his father, Ernest, remodeling homes for many in the community. He loved to make barn wood frames for his pictures. Alfred has specially made barn or truck shaped toy boxes for each of his grandchildren and now great grandchildren. Genealogy was another love, tracing family history as far back as he could and writing those stories. He was also a contributing editor for the Blaine County History Book. Every summer he took time to plan a family vacation usually to a different state each time and loved showing his slides at family gatherings. Using his navigation skills he loved to map out and write itineraries for the trips. Al loved putting together photo albums and scrapbooks about family and events. Al and Marilyn moved from the ranch to Ainsworth, Nebraska November 2011. Alfred was preceded in death by his parents and sister, Irene Sinner. Survivors include his wife, Marilyn of Broken Bow, daughter, Jeanie Ryker and her husband Dean of Cozad, Nebraska; sons, Eric Schipporeit of Brewster and Kent Schipporeit and his wife Debbie of Valentine, Nebraska; grandchildren, Jason (Sybil) Ryker, Monica (Casey) Douglass, Sara Schipporeit, Justina (Timber) Burge; Bryant (Myranda) Schipporeit and Thomas Schipporeit; great grandchildren, Ryan and Katelyn Douglass, Mattie and McClellan Ryker, Sarah, Marlie and Kimber Burge and Hanna Schipporeit; sister, Bette Guggenmos of Broken Bow, numerous nieces, nephews, cousins and friends. Funeral services were held at the Zion Lutheran Church at Ainsworth, Nebraska with Pastor Georg Williams and Pastor Ryan Loeslie officiating the service. Music was provided by Georgia Williams with congregational selections of "I Know That My Redeemer Lives" and "Eternal Father, Strong to Save" (The Navy Hymn) being sung. A violin instrumental of "Amazing Grace" was provided by great-granddaughter, Mattie Ryker. Pallbearers were, Casey Douglass, Bryant Schipporeit, Jason Ryker, Ryan Douglass, Thomas Schipporeit, McClellan Ryker, and Timber Burge. Burial with full Military Honors followed at the German Valley Cemetery near Brewster, Nebraska. Hoch Funeral Home was in charge of the arrangements. Memorials are suggested to American Legion Post #323 of Brewster or to the Zion Lutheran Church in Ainsworth.

The family of Mr. Alfred E. "Al" "Shippy" Schipporeit created this Life Tributes page to make it easy to share your memories.