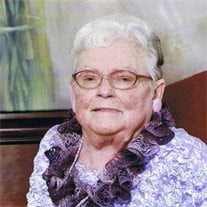 Alda Mae (Moon) Ellis, was born on February 26, 1937, at Stuart, Nebraska to Fred and Margaret (Johnson) Moon, and passed away on January 3, 2017 at the Long Term Care in Bassett, Nebraska, just shy of her 80th birthday from the adverse affects of COPD. They lived on a farm south of Stuart. She has one brother Donald Moon. Alda worked as a waitress in her early years, but was always trying to improve herself. She eventually received a Dietician certification from NEC, and Alda worked at the Ainsworth Care Center and lastly at Cottonwood Villa. She was an avid card player and could be found at the Senior Center regularly and in the local Bridge Clubs. She also was a League Bowler going to State many times and was the statistician for many years. Numbers were always a strong point of hers. Alda was a member of the Fraternal Order of Eagles, and the United Methodist Church here in Ainsworth, as well as an Avon Representative. She also sold Watkins products. She regularly volunteered for the Ainsworth Thrift store, loved her country music and took many pictures of family and events. She is preceded in death by her parents, an infant son, Allan Wayne Huggins, husbands, Lenerd King, Don Huggins, Gene Ellis and her love and partner Al Hamik. She is survived by her four children, sons, Terry King and wife Diane of Lincoln, Nebraska, Steve King and wife Louise, of Gillette, Wyoming; daughters, Deb Ballandby of Kennewick, Washington, and Kristi Caauwe and husband Chris of Rohnert Park, California. 12 grandchildren, and five great-grandchildren; brother, Don Moon of Newport, Nebraska, along with nieces, nephews, friends and neighbors. Funeral services were held on Saturday, January 7, 2017 at the United Methodist Church in Ainsworth, Nebraska with Pastor David Randall officiating the service. Music was provided by Sherry Campbell, along with singing congregational selections of, "Alas! And Did My Savior Bleed," "In The Garden," and "How Great Thou Art." Casket bearers were Terry King, Steve King, Debra Ballandby, and Kristine Caauwe. A Memorial Gathering was then held on Monday, January 9, 2017 at the Stuart Community Church in Stuart, Nebraska, with Pastor Wayne Owens officiating with interment at the Stuart Community Cemetery. Memorials were suggested to the United Methodist Church in Ainsworth, or to the family in her name.

Alda Mae (Moon) Ellis, was born on February 26, 1937, at Stuart, Nebraska to Fred and Margaret (Johnson) Moon, and passed away on January 3, 2017 at the Long Term Care in Bassett, Nebraska, just shy of her 80th birthday from the adverse affects... View Obituary & Service Information

The family of Mrs. Alda M. (Moon) Ellis created this Life Tributes page to make it easy to share your memories.