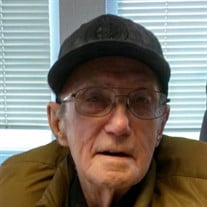 Albert Lee “Bill” Mitchell, formerly of Wood Lake, Nebraska, passed peacefully from this life Saturday, November 21, 2020 at the Sandhills Care Center in Ainsworth, Nebraska, where he had lived for the past three years. Bill was 91 years, one month, and seven days old. Bill was the youngest child of Frederick Guy and Carrie Eliza (Phillips) Mitchell and was born in their house in Johnstown, Nebraska, on October 14, 1929. Before he retired in 2003, Bill spent 60 years doing hard labor in a variety of jobs - whether it was driving the tank wagon at his dad's Mitchell & Sons DX station, the Buick garage in Cody, Wyoming, working on ranches in Nebraska and California, or 40 years of construction work starting in 1963 up until he retired. In the middle of all of this, Bill joined the Army in December of 1946 where he was assigned to Vienna, Austria. He arrived 20 days before WWII ended and was there for just under a year and a half. After returning home, Bill married Donna Jean Runolfson on March 16, 1950 in Lander, Wyoming. Together they had two sons: Robert Eugene Mitchell, (1/9/51–1/5/17); and William Dean (Mitchell) Runolfson, 1/22/52, currently living in Duvall, Washington, with his wife Pat and family, and one daughter that died shortly after she was born on 2/12/55. After their divorce, Bill married Eloise Minor Kabella on May 30, 1958 until her death on July 15, 2000. Bill became the stepfather to her two sons: Jack Wendell "Skip" Kabella, (2/19/47-1/24/05); and Bruce Jerel Kabella, (11/15/49-5/6/13). Together they had one daughter, who died shortly after her birth on 7/14/63. They lived in Johnstown for 16 years before moving to Wood Lake in 1974. Bill proudly received his GED in 1986. Outside of work, Bill enjoyed spending time with his family, playing cards, attending rodeos, trapping, hunting and fishing. His passion for trapping, hunting and fishing was passed on to his stepsons and step-grandchildren. Bill was a past member of the Wood Lake Fire Department and is a current member of the Wood Lake American Legion Post 202, serving as commander in 1959. Bill has seven grandchildren, five step-grandchildren, and a total of 13 great-grandchildren. Bill also has five nieces and nephews: Sandra, Charles “Chip,” Sonja, Sherry and Crit. Bill was preceded in death by his parents, his wife, Eloise, all four of his brothers and one sister, both stepsons, two infant daughters, his oldest son, and special friend, Darlene Hall. He is survived by his son, William (Pat), his daughters-in-law, Diane Mitchell, Carolyn Kabella, Jean Kabella, his grand and great-grandchildren, as well as nieces, nephews, friends, and associates from a lifetime in this area. A special thanks goes out to Sherry Mitchell for her untiring work to see to his every need. It is a blessing to all of us to have you in our family and in our lives. Graveside Services were held on Wednesday, November 25, 2020, at the Mount Hope Cemetery in Wood Lake, Nebraska, with Pastor Don Letellier officiating. Casket Bearers were: Crit Mitchell, Chip Mitchell, Troy Kabella and Darin Huehl. Military Honors were conducted by Wood Lake American Legion Post #202. Memorials were suggested to the Wood Lake Fire Department or to the Sandhills Care Center.

Albert Lee &#8220;Bill&#8221; Mitchell, formerly of Wood Lake, Nebraska, passed peacefully from this life Saturday, November 21, 2020 at the Sandhills Care Center in Ainsworth, Nebraska, where he had lived for the past three years. Bill was... View Obituary & Service Information

The family of Albert L. "Bill" Mitchell created this Life Tributes page to make it easy to share your memories.