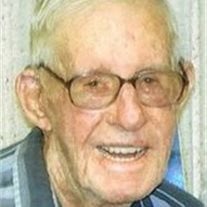 Burton Alphonso Vargason was born on March 8, 1921, the fifth child of Harry and Louise Vargason. He was born at the homestead 7 miles north of Bassett, Nebraska. Burton was 9 years old when his mother died, so he and his brother Shorty lived with different families, attending school when he could. Burton eventually went to live with his grandparents Anna and George Vargason helping them with their ranch. In September of 1942 Burton went to serve his country in World War II. While fighting in the South Pacific, he was severely wounded and returned to the United States where he spent 6 months and 19 days at Winter General Hospital in Topeka, Kansas. Corporal Burton Vargason received an honorable discharge on October 7, 1944. Upon his discharge he returned back to help his grandparents with their ranch. Soon upon his return to the Riverside community, Burton started to court Lillian Haight, and a little over a year later they were married on December 9, 1945. On November 11, 1946 he and Lillian were blessed with their first daughter Connie Marie. They were to only have her for a few short months as she contracted polio and passed away on June 16, 1947. Burton and Lillian were blessed with two more daughters, Shirley May and Carol Sue. Carol Sue passed away on November 26, 2002. Burton worked for many different ranches in Rock County including being a butcher and janitor until being elected the Rock County Sheriff in November 1962. Burton was the Sheriff of Rock County for 24 years, having the office in his home for 20 years. Lillian, Shirley May and Carol Sue all helped him out by being dispatchers and even riding with him to get prisoners. Many a holiday was put on hold so he could go help someone. Burton was a true rancher at heart. He loved his horses and cattle and enjoyed teaching his family all his secrets about cows and horses. He even loved it when a group of his great-grandkids would ride up to the picture window and show him which horses they were riding that day. One of the things he was very proud of was being a founding member of the KBR Saddle Club. Many an enjoyable weekend was spent on trail rides. Burton was a member of the VFW and Legion. Burton passed away on October 12, 2014 at the Rock County Hospital, at the age of 93 years and 7 months. He is preceded in death by his parents; infant daughter Connie Marie, and Carol Sue Oestmann; great-granddaughter Heidi Sue Kepler; brothers, Tom Vargason and wife Lorrine, Marshall Vargason, Orval Vargason and wife Ida Bell, Shorty Vargason and wife Mildred, and infant brother and sister Charles and Rebekah; brothers-in-law, Marvin and Merlin Haight; sister-in-law, Betty Brown. Burton is survived by his wife of almost 69 years Lillian of Bassett, Nebraska; daughter, Shirley May Kepler and husband Clifford of Bassett; granddaughters, Connie Jackson and husband Robert, Sandi Nelson and husband Jake; grandson Billy Kepler and wife Ann Marie; Great-grandchildren, Bridget and Ty Jackson, Kaitlyn and Carter Nelson, and Karlene, Shelby, and Toby Kepler, along with many nieces, nephews, and other family members. Graveside services with Military Honors by the Bassett America Legion Post #123 were held at the Bassett Memorial Park Cemetery on October 16, 2014 under the direction of Hoch Funeral Home of Bassett. Family sharing was given by Buff Haight, Tami Knuth and George Huff. Last Call Rites were given by the Rock County Sheriff's Department. In lieu of flowers, memorials were directed to the family for future designation.

Burton Alphonso Vargason was born on March 8, 1921, the fifth child of Harry and Louise Vargason. He was born at the homestead 7 miles north of Bassett, Nebraska. Burton was 9 years old when his mother died, so he and his brother Shorty lived... View Obituary & Service Information

The family of Mr. Burton A. Vargason created this Life Tributes page to make it easy to share your memories.