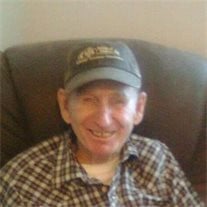 Alvin Keith Coble was born on October 7, 1923 at Johnstown, Nebraska and passed away on April 27, 2013 at 89 years of age at the Parkside Manor Assisted Living in Stuart, Nebraska. He was the son of Lewis Arthur Coble and Gladys Marie (Minard) Coble and grew to manhood at Wood Lake, Nebraska. He graduated from Wood Lake High School where he was very active in sports. He entered the United States Army during World War II and served from 1943 to 1946. Keith was deployed in the Pacific Theater and spent much of his military in the Philippines. He was united in marriage to Mary Louise Wolcott on January 17, 1948 at Ainsworth, Nebraska. They lived for a short time in Wood Lake, then moved to a ranch in Rock County where they spent their entire lives raising purebred Herefords and later, Angus cattle. Two sons were born from this union, Robert and Steven. Keith served on the Rock County District #80 School Board for a number of years and was involved in 4-H with his sons. His joys in life were his family, hunting, fishing, and working on the family ranch. Keith was never too busy to stop what he was doing to play with the children. Most recently he loved spending time with his four great grandsons. Watching them play and grow, never missing an opportunity to show his newest picture of one of them to the neighbors. Keith was preceded in death by his parents, three brothers and two sisters-in-law. He is survived by sons, Robert and wife, Barb of Tilden, Nebraska, Steve and wife, Cathy of rural Bassett, Nebraska; six grandchildren, Maegon, Brandon, Dane, Matthew, Lori and Lisa, and four great-grandchildren, Trenton, Kenny, Ty Michael and Tayten; one brother, Thomas Coble and wife, Elsie of Ainsworth; two sisters-in-law, Mardele Coble of Stanton, Nebraska and Elaine Gilg and husband, Bob of Newport, Nebraska; and a brother-in-law, Rex Young of Lakewood, Colorado; along with nieces, nephews and cousins. Graveside Memorial Services were held on Friday, May 3, 2013 at the Ainsworth Cemetery. Special reflections were given by family and friends. Granddaughter Maegon Coble sang "Amazing Grace." Military Honors were conducted by the Ainsworth American Legion Post #79. Hoch Funeral Home of Bassett was in charge of the arrangements.

Alvin Keith Coble was born on October 7, 1923 at Johnstown, Nebraska and passed away on April 27, 2013 at 89 years of age at the Parkside Manor Assisted Living in Stuart, Nebraska. He was the son of Lewis Arthur Coble and Gladys Marie (Minard)... View Obituary & Service Information

The family of A. Keith Coble created this Life Tributes page to make it easy to share your memories.

Alvin Keith Coble was born on October 7, 1923 at Johnstown, Nebraska...